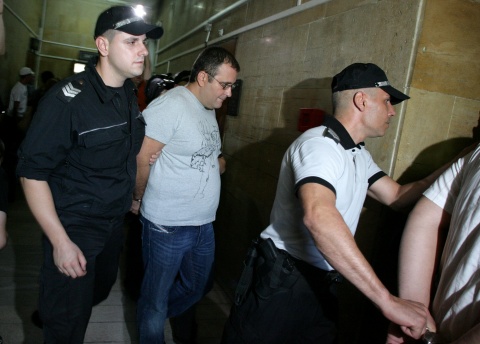 Hristo (Itso) Baykov, said to be the new drug boss of the Bulgarian capital Sofia, has been left in permanent detention on racketeering charges.

The Sofia Regional Court left Baykov behind bars on the request of the Prosecutor's Office at a hearing Monday night. Baykov has already been in detention for 24+72 hours, after he was nabbed in a police operation on Thursday together with three of his aides.

According to the prosecutors, Baykov threatened and beat up Kolev demanding BGN 25 000 from him, after Kolev renovated the home of Baykov's girlfriend.

Two of Baykov's aides also got charges on Monday. Valentin Demirev was charged with illegal weapon possession, and Dimitar Hristov – with illegal drugs possession. Demirev and Hristov were released on bail.

According to the Prosecutor's Office, between July 6 and July 27, Baykov racketeered Ivan Kolev for the specified sum of money. He threatened not only the architect but also his family.

"We will rip you apart. I will break your legs and arms, and will leave you disabled." This is how Baykov threatened Kolev, according to witness testimonies.

Kolev himself also claims to have been beaten although he was unable to provide a medical document proving that.

Regardless of that, the Sofia Regional Court left the alleged rising drug boss in jail with the argument that he can plausibly be assumed to have threatened Kolev, and that he could commit another crime.

The Court has further described Baykov as a "personality of a high level of public threat."

If found guilty of racketeering and extortion, Baykov could get between 1 and 6 years, and a fine of between BGN 1 000 and BGN 3 000, according to Bulgarian legislation. His permanent detention can be appealed.

In a Friday interview for the TV channel bTV, Deputy Prime Minister and Interior Minister, Tsvetan Tsvetanov, said if there was any police cover-up for Baykov it had been on the level of a district precinct only, and vowed strong sanctions against any policeman involved in it, upon collection of sound evidence.

Earlier this week, the Bulgarian 24 Chasa daily published a report describing Baykov as the new top leader of the drug market in Sofia who was aggressively conquering more and more territories in the Bulgarian capital.

The report stressed the fact that he would seek to scare off his competition by claiming to be paying both the Interior Ministry and the Prosecutor's Office, thus becoming "untouchable."

The paper also published photos from one of Baykov's visits to a bar in the Belite Brezi quarter in Sofia where the alleged drug boss's guards would block the street, setting up checkpoints and directing away local residents.

The 36-year-old Itso Baykov is said to be in charge of the narcotics supply in a number of quarters in Sofia – Boyana, Dragalevtsi, Simeonovo, Vitosha, Knyazhevo, Ovcha Kupel, Lagera, Hipodruma, Borovo, and Krasno Selo as well as some parts of the city center.

Commissar Stanimir Florov from Bulgaria's Unit for Combating Organized Crime (GDBOP) said Thursday after Baykov's arrest that the alleged drug lord had already been arrested by GDBOP several months ago.

However, the Prosecutor's Office had decided that it could not be proven that the drugs and illegal weapons found in the same home were actually Baykov's.