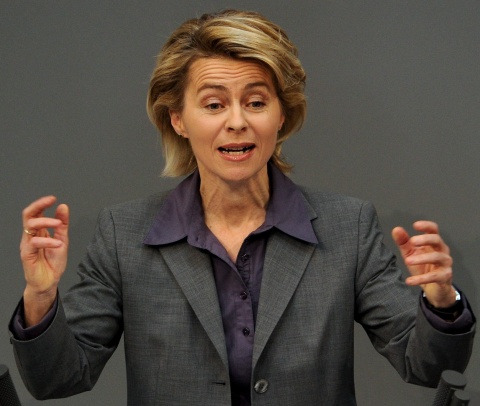 German Labor Minister Ursula von der Leyen has backed the idea for creating a United States of Europe despite meager support for the proposal from the current government. Photo by BGNES

German Labor Minister Ursula von der Leyen has said that the crisis in the euro zone can only be overcome through the creation of a United States of Europe.

"My goal is the United States of Europe following the example of other federal states such as Switzerland, Germany or the U.S.," the Minister was quoted as saying Sunday.

According to Leyen, as cited by Der Spiegel, a political union would unify important issues in financial, economic and tax policy "taking advantage of the greatness of Europe,"," because the common currency is not enough for the EU in order to face global competition.

Von der Leyen admitted that her stance was not officially backed by the Merkel Cabinet, at the same time insisting that Germany's policy on the euro zone crisis was increasingly veering towards joint economic governance.

Germany's Labor Minister is not the only one urging member states to cede more and more of their sovereignty to EU.

According to former Austrian Foreign Minister Benita Ferrero-Waldner, despite the fact that Europeans are already finding it hard to work together, the federation scenario seems more and more necessary with every day that passes.

Romanian President Traian Basescu cautioned on August 20 that the EU would not be able to retain its economic and military power unless all member states gave up sovereignty.