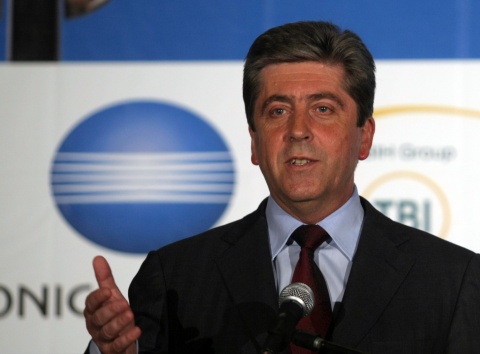 Bulgarian President Georgi Parvanov has said that he hopes to be able to reinforce BSP, where he started his political career, with his return. Photo by BGNES

Bulgarian President Georgi Parvanov, who is drawing closer to the end of his second and last term in office, has said that his return to the Bulgarian Socialist Party (BSP) would reinforce the formation and open it to new partners.

Last week, Bulgarian media hinted at intentions of the head of state to return to the left-wing party from which he started his political career and even become its leader.

The idea was instantly dismissed as "impossible" by Sergey Stanishev, current leader of the political formation.

"Every former President has enough authority to engage in political activities. However, I cannot picture anyone returning to a role one has left," said Stanishev, who is a former PM (2005-2009).

The BSP leader further noted that there would be nothing wrong if Parvanov decided to return to the left-wing entity as a regular member because "every party should make good use of people with such experience, they are always influential,".

In his Monday statement, President Parvanov firmly rejected suggestions that he would close BSP to set up a Bulgarian PASOK.

"I believe that this was conjured up by a person who spent the summer holidays in Greece (as Sergey Stanishev did, editor's note). I think this is absolutely ridiculous. Such suspicions existed back in 1997-1998, when I was involved in creating a new left-wing party, Coalition for Bulgaria. In this respect, my return to BSP would be a moral gesture of acknowledgement towards people whom I have worked with a lot. Apart from that, I hope it will reinforce the party, make it stronger and open it to new and powerful coalition partners", Parvanov declared.

He further made it clear that he was not aspiring for high party posts, which were certain to stir up intense competition.

Parvanov also spoke in favor of minimal adjustments to the presidential powers as regards overcoming the veto.

"A vetoed law is sometimes automatically put to a new vote" the head of state explained, urging his audience to decide whether Bulgaria needed a "Master of Ceremonies" or an active and strong president, capable of addressing every issue which came up in the country.

Parvanov also took an ironic jab at the election motto of ruling center-right party GERB, saying that it was similar in meaning but less engaging than a popular communist slogan.

Georgy Parvanov will leave office on January 22, 2012, welcoming his successor to the post.

He was first elected President in 2001, having been a socialist leader since1996.

The forthcoming presidential elections will be held on October 23, together with nationwide local elections.