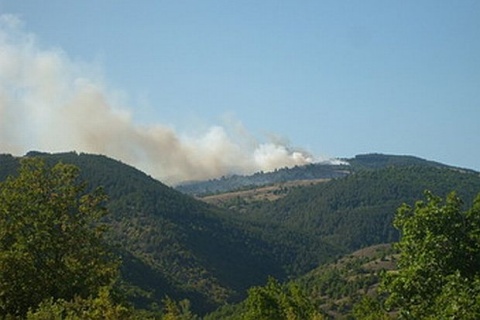 A wild fire is burning in southwestern Bulgaria with the authorities not discounting human recklessness as its cause. Photo by BGNES

A wild fire involving nearly 200 decares of forest is raging in southwestern Bulgaria, in the vicinity of the village of Frolosh, located near the Kuystendil-Blagoevgrad regions line.

The blaze has been isolated Monday morning, but it is still burning. It has started from the village around 3 pm Sunday and engulfed at first about 40 decares of woods, only to spread later to 100 decares of pine trees and 70 decares of deciduous forests and other vegetation.

Two deserted building have also been destroyed. There are no reported injuries.

Firefighters, rangers and local people are trying to tame the fire. The authorities are investigating the cause of the blaze and are not discounting the possibility of human recklessness.

Two other wild fires were reported Sunday in the Blagoevgrad Region – about 1 000 decares of just leaves burned near the village of Gradovo while a fire close to the Kulata border checkpoint with Greece destroyed a large area with dry grass and bushes.