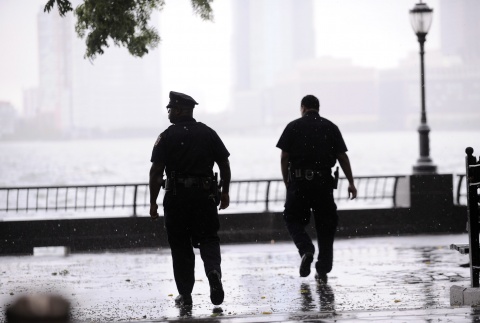 Officials said the storm had knocked out power to more than 3 million people and was responsible for at least 11 deaths, up from 9 deaths reported earlier on Sunday, in four states as it pummeled some of the biggest cities in the Northeast.

The flood reports come just as the National Weather Service of the USA downgraded Irene to a tropical storm as the system made landfall over Coney Island in New York. The storm is maintaining winds up to 65 mph, The Washington Post reported.

The Port Authority of New York and New Jersey closed the north tube of the Holland Tunnel due to flooding, and CNN affiliate WCBS reported serious flooding in Brooklyn.

"The challenge of New York is that so much of the electricity and other infrastructure is below the surface," he said.

That means flooding could bring life in the city to a standstill even after waters recede, he said.

Waves pounded the shoreline in Long Beach, New York, as water poured underneath the boardwalk and into the city's downtown area.