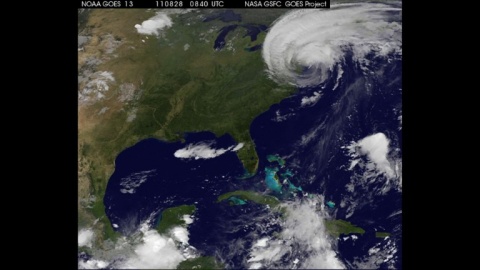 A weakened Hurricane Irene tore Sunday into New York, hammering Manhattan`s skyscrapers with fierce winds and threatening to flood the financial district after killing at least nine people along the US east coast. Satellite images. EPA/BGNES

Hurricane Irene has killed 9 people as it made its way up the US East Coast, and has left a million Americans without electricity.

As it moved north, however, Irene's strength subsided. By 7 a.m. Sunday, the storm was just barely a hurricane, with its maximum sustained winds at about 75 miles per hour, the limit by which it could be considered a Category 1 Hurricane and not a tropical storm, the Washington Post reported.

Irene is expected to decrease in intensify even further as it is to reach New England later on Sunday, according to the latest bulletin from the National Hurricane Center in Miami, cited by the WP.

However, Irene is still expected to cause massive flooding and power outages. It is expected to bring down thousands of trees.

Meanwhile, regions in New Jersey and Delaware saw warnings and reports of tornadoes as the inclement weather persists.

Hurricane Irene has left about 1 million consumers without electricity in North Carolina and Virginia.