Regling: Euro Zone to Shake Off Debt Crisis by 2014 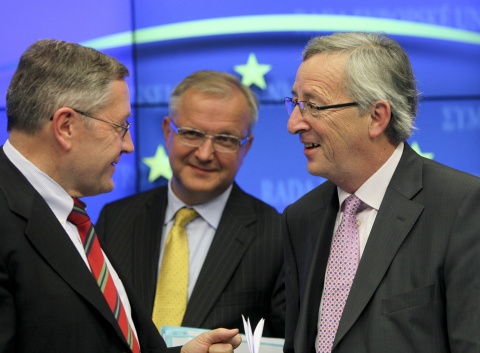 The euro zone will be able to overcome its current debt crisis by 2014, believes Klaus Regling, the head of the European Financial Stability Facility (EFSF).

"One can justifiably expect the crisis to be over within two to three years. In all eurozone countries the fundamentals are improving," the chief of the EFSF, euro zone's rescue fund, told the Spiegel magazine on Sunday.

He argued that all of the euro zone states have already started to put their state finances in order, and some of those worst affected by the crisis – most notably Ireland – are getting back on their feet.

Regling said the risk that the euro currency will be abandoned is “zero” because both weak and strong countries have an interest in retaining it.

"The risk that the euro is discarded, from whatever quarter, is zero," he said, criticizing what he sees as excessive pessimism in Germany on this topic.

Regling thinks that the situation at the Euro Area is better than the state finances of the USA.

"The US deficit, for example, is three times as high as that of the euro zone,” he is quoted as saying

The EFSF was set up last year to help shore up debt-ridden countries. Its role is shortly to be expanded in line with measures agreed to by euro zone leaders in July.