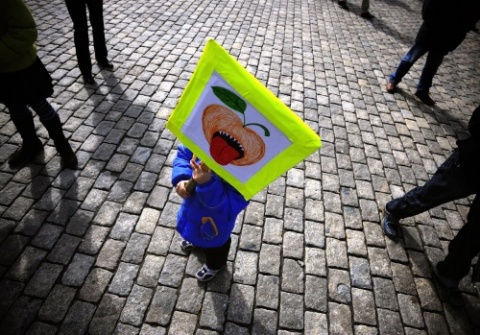 A child holds a sign during a demonstration against genetically modified organisms (GMO) in Sofia, Bulgaria, in February 2010. Photo by EPA/BGNES

Bulgaria's legislation on Genetically Modified Organisms (GMO) has been carefully followed by the US Embassy in Sofia.

The information comes from several US diplomatic cables, (one by current US Ambassador in Sofia, James Warlick), which were released by WikiLeaks and their Bulgarian partner, the site for investigative journalism Bivol.bg.

According to the cables, GMO supporters in Bulgaria are actively backed and financed by the American Embassy, as Bivol writes.

In a cable, sent in 2006, Charge d'Affaires, Alex Karagiannis, informs the US Department of State that the main obstacle for the passing of more liberal GMO legislation has been opposition coming from the President of the Bulgarian Academy of Science (BAS), Ivan Juchnovski.

"According to Atanas Atanassov, Director of the Agro-Bio Institute (ABI), Juchnovski sent various "experts", who knew little about the science of GMOs, to the Environmental and Agriculture Parliamentary Committees to critique the draft law. These experts propagated the view that "the harmful effects of GMOs on human health and the environment is a fact." BAS insisted on a ban on the cultivation of modified crops since "no convincing evidence as to the safety of GMOs" exists. Taking BAS's concerns to heart, the current law's stated priority is "to protect human health and the environment" regardless of the existing economic interests or the unavailability of sufficient scientific data," Karagiannis writes, explaining that GMO lobbyists, with the support of Deputy Minister of Agriculture Svetla Batchvarova, have sent a letter to the EU Commission asking if Bulgarian GMO law is consistent with EU legislation..

"Atanassov believes Bulgaria could face penalties if the law is shown to be out-of-step with EU policy, which might just be the stick GMO supporters here are looking for to convince the government to revise the law," the cable reads.

"Embassy Sofia has a well-defined biotechnology strategy supported by the US biotech industry and important local stakeholders", Ambassador Nancy McEldowney writes in January 2009.

According to McEldowney's report, "the goal of the Embassy's public diplomacy initiative is to spur debate and discussion about biotechnology, create positive public opinion, and to provide broader availability of scientific information about agricultural biotechnology to both the media and consumers...Gaining key opinion leaders' support will help increase the public's awareness and trust in foods derived from GMO products.  The proposed program has been discussed with and received the backing of local counterparts who have created an informal consortium to steer the program's activities and content. This Consortium includes: the National Agricultural Academy, National Biosafety Commission, agricultural and food research universities and institutes, the local Association of Agricultural Producers, and specialized media."

Bivol further points out that in 2010, the American lobby got a new chance for success, after the liberalization of GMO legislation became a strategic priority of the new cabinet of Prime Minister, Boyko Borisov.

"Under heavy pressure to amend the draft legislation, the current government suggested adding a five-year moratorium for releasing GMO products into the environment or for farming purposes.  Minister of Agriculture Miroslav Naydenov admitted in a meeting with Ambassador February 11 that this moratorium is a tactical approach in order to achieve the strategic goal of passing the draft law. He expected that once the new legislation is passed, the European Commission would view the moratorium as a delay in the implementation of the law and Bulgaria would be forced to lift it. In Naydenov's view, it would be easier to lift a moratorium under pressure from the EC than to change the legislation," current US Ambassador in Sofia, James Warlick, wrote in February 2010, stressing such strategy was "walking on a tight rope," since the public opinion has been heavily influenced by anti-GMO rhetoric.

"If Naydenov is correct, and the EC ultimately forces Bulgaria to lift the proposed moratorium, the government will have the excuse it needs to finally liberalize Bulgaria's biotech regime. But it will be a tough fight," the Ambassador concludes.

As Bivol stresses, the development of events proved Naydenov wrong – not only didn't the EC sanction Bulgaria, but due to the activities of a number of Bulgarian politicians, the European Parliament accepted and backed the right of each country to determine the local level of GMO restrictions.