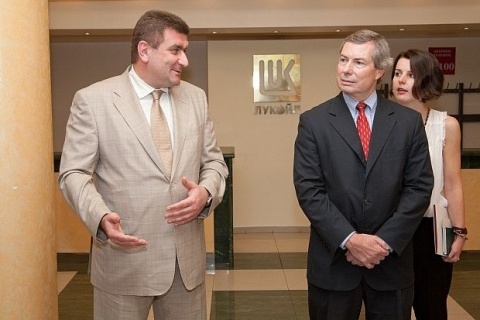 The CEO of Lukoil Bulgaria, Valentin Zlatev (l), and the American Ambassador in Sofia, James Warlick, toured the only oil refinery in the country, owned by Russia's Lukoil. Photo by DarikNews

The CEO of Lukoil Bulgaria, Valentin Zlatev, remains unwavering the company has not committed any tax or Customs law violations.

"Lukoil does not have even one citation for tax and Customs violations," Zlatev is quoted saying. He was adamant that Lukoil never stopped fulfilling the requirements of Order 3 for the installment of electronic measuring devices to be connected to the National Revenue Agency, NRA, and the Customs Agency.

Zlatev made the statement during a press conference in the headquarters of Lukoil Neftohim in the Black Sea city of Burgas. The briefing was dedicated to the first ever visit of the American Ambassador in Sofia, James Warlick, to the only oil refinery in the country, owned by Russia's Lukoil.

Warlick had extended praise to the company as a reliable fuel supplier on the local and international markets and for being the largest private employer in the country, contributing to the development of Bulgaria's economy.

The diplomat was also accompanied by the Mayor of Burgas, Dimitar Nikolov, the Chief Engineer of the refinery, Ilshat Sharafudinov, and the refinery's Production Director, Dimitar Dobrev.

Zlatev further rejected wide-spread reports and accusations of Lukoil being a cartel on the fuels market in Bulgaria.

The Lukoil saga emerged at the end of July when the Customs Head, Vanyo Tanov, issued an order to revoke Lukoil's license to operate excise warehouses over the company's failure to install the required electronic measuring devices within the deadline.