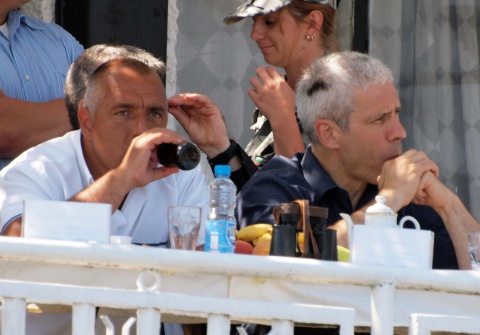 Bulgarian Prime Minister Boyko Borisov has promised to do all he could in order to get Serbia admitted to the EU after talks with Serbian President Boris Tadic during joint military drills.

The state leaders of Bulgaria and Serbia Borisov and Tadic attended together Friday the joint anti-aircraft artillery (AAA) drills of the Bulgarian and Serbian armed forces in Shabla (taking place August 24-26, 2011) together with Bulgarian Defense Minister Anyu Angelov and his Serbian counterpart Dragan Sutanovac.

The drills were marred by the break out of a fire which, however, does not appear to have spoiled the evidently cordial Borisov-Tadic talks.

"These military drills are a sign of the close relations between the Serbian and the Bulgarian military. I want to congratulate Boyko Borisov on the results [Bulgaria] achieved as member of NATO and the EU," Serbian President Tadic stated in Shabla, as quoted by BGNES.

"We would like to use Bulgaria's experience about its NATO and EU achievements. I hope that with this military exercise we have contributed even more to the stability on the Balkans," he added.

In addition to vowing to help Serbia join the EU, Bulgaria's PM thanked Tadic for the praise, and in turn congratulated the Serbian President for his efforts to earn Serbia a place in the family of the EU.

Borisov went further as to stress the large-scale infrastructure projects in Bulgaria and the region that are expected to contribute to closer integration.

"That is why we are now working on railways, we work to electrify them and increase their speed, in addition to building highways, so that goods and people can travel fast in the region between Istanbul and Belgrade," the Bulgarian PM declared.

Bulgaria and Serbia have explicitly stressed the construction of the Sofia-Nis highway in their bilateral contacts in the recent months.