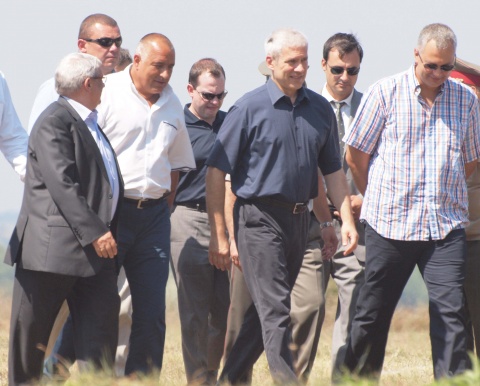 Bulgarian PM Boyko Borisov (middle left) and Serbian President Boris Tadic (middle right) are seen walking away after a fire broke out on the firing ground. The smoke created by the fire is visible in the background. Photo by BGNES

Every fire has a silver lining, according to Bulgarian Prime Minister Boyko Borisov's comment about the fire that erupted during joint Bulgarian-Serbian anti-aircraft drills, attended also by Serbian President Boris Tadic.

The state leaders of Bulgaria and Serbia Borisov and Tadic were attending together Friday the joint anti-aircraft artillery (AAA) drills of the Bulgarian and Serbian armed forces in Shabla.

They came for the final day of the Bulgarian-Serbian AAA drills on the firing ground near the Black Sea town of Shabla, which are taking place August 24-26, 2011, together with Bulgarian Defense Minister Anyu Angelov and his Serbian counterpart Dragan Sutanovac.

The fire erupted after the firing of the first three anti-aircraft rockets Friday afternoon as the grass around the firing ground off the Black Sea coast caught fire, engulfing the entire area in thick smoke.

Anti-aircraft missiles fired during the joint Bulgarian-Serbian military drills near Shabla on the Black Sea coast have caused a fire before the eyes of Bulgarian Prime Minister Boyko Borisov and Serbian President Boris Tadic.

The fire broke out just 100 meters from the formal delegations led by Borisov and Tadic, with the entire mass of smoke moving in their direction because of the wind. The fire was put out by the local fire-fighters.

"Let there be a fire so that we can see how the anti-aircraft artillery units would do if there was an actual war," Prime Minister Boyko Borisov, himself a former senior fire brigade officer, commented laconically before reporters after the Bulgarian-Serbian drills were completed and the fire was extinguished.

Bulgarian Defense Minister Anyu Angelov, however, criticized the media for paying more attention to the fire than to the results of the actual Bulgarian-Serbian AAA drills.

Friday's fire is not the first incident at the Bulgarian military's AAA drills near Shabla.

Back in 2009, when the drills were carried out only by the Bulgarian armed forces, one of the rockets exploded 50 meters up in the air a second after the launch in front of the eyes of then Defense Minister, Nikolay Mladenov, and President Georgi Parvanov, who is the Bulgarian Commander-in-Chief.No one was killed or injured by the explosion but the drills had to be terminated for some time. The explosion originated in the engine of the anti-aircraft missile, whereas its head fell in the sea.