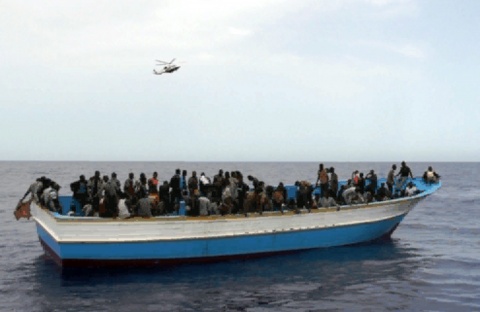 A video grab provided by the Italian Coast Guard released on 05 August 2011 shows the moment around 300 sub-Saharan migrants were rescued after they were found on a barge 166 kilometres from of Lampedusa on 04 August 2011. I

Libyan dictator Muammar Gaddafi intended to send thousands of African migrants to Italy's tiny island of Lampedusa in order to wreak havoc with it, according to Italian Foreign Minister Franco Frattini.

Thus, the embattled leader wanted to have his revenge on Italy after the former colonial power endorsed the Libyan rebel movement and joined a NATO campaign to oust him, Frattini has explained.

In an interview with Avvenire, Frattini revealed that Gaddafi sent "terrible messages" threatening to turn Lampedusa into an "inferno" by sending thousands of migrants on boats to the little island. The messages would be shown to the public soon, Frattini promised.

Gaddafi would have taken advantage of the fact that Libya has been used as a gathering point from where thousands of African migrants have set sail to cross into Europe via Lampedusa.

Some of the messages Italy has show that Gaddafi's regime ordered dead soldiers to be dressed in civilian clothes in order to blame NATO for their deaths, according to Frattini.