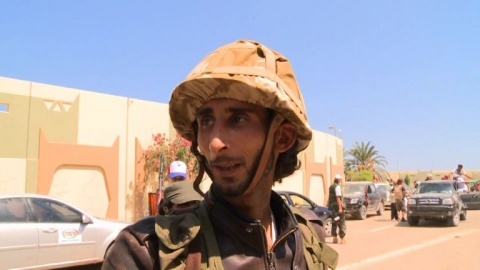 The hunt for Muammar Gaddafi has been going on since rebel fighters captured the Libyan leader`s residence in Tripoli. Photo by EPA/BGNES

The UN Security Council has approved the US initiative to release USD 1.5 B in frozen Libyan assets in American banks.

The freezing came after two UN resolutions from the beginning of the year, followed by a compromise between the US and South Africa, which called the move an official recognition of the opposition Transitional National Council (NTC).

Meanwhile, Libyan pro-Gaddafi TV reported overnight that NATO aircraft was bombing the town of Sirte – one of the last remaining bastions of the dictator. The rebels are advancing to Muammar Gaddafi's hometown, but there is fierce resistance east of Sirte.

The opposition announced they are holding talks with local tribes to secure the dictator's capture. Information Gaddafi is hiding in his hometown remains unconfirmed. On Thursday, rebel forces had heavy fights in Tripoli over suspicions this was his hideout location. A former ally said the dictator might have fled dressed as a woman.

It was also reported that rebel forces are getting ready to back their counterparts in the town of Zuara, west of Tripoli, which is surrounded and bombed by Gaddafi military. In the last three days Zuara was controlled by the opposition, but on Wednesday the rebel forces asked for help to counter the pro-regime units, surrounding them.

The UN decision opens the door for the US to hand the funds to the Libyan revels. According to the US Department of State spokesperson, the money will be released in three tranches of USD 500 each.