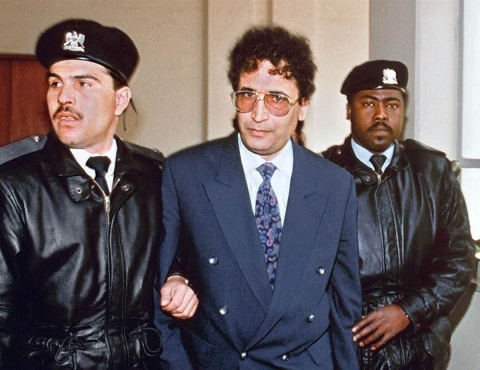 Lockerbie bomber Abdel Baset al-Megrahi is escorted by security officers in Tripoli on Feb. 18, 1992. Al-Megrahi was granted a compassionate release from a Scottish prison in August 2009 on the grounds that he was suffering from prostate cancer and would

Lockerbie bomber Abdelbaset al-Megrahi has left Tripoli amidst the ongoing civil war in Libya, probably evacuated by Libyan dictator Muammar Gaddafi, just as the UK government said he might be wanted again.

The former Lybian intelligence officer, Abdelbaset Ali Mohmed Al Megrahi, sentenced as the perpetrator of the 1988 Lockerbie Bombing, has thus captured again global media attention two years after he was released from a Scottish prison on August 20, 2009.

Abdelbaset Ali Mohmed al Megrahi left his modern villa at the weekend when rebel troops made a sudden advance on the capital, according to a neighbor quoted in the Scottish Herald newspaper.

Megrahi's neighbor, Dr Hussein Barba, said: "This man knows too many things. Gaddafi has taken him with him, wherever he is."

Hague told the BBC he had disapproved of the decision to release Megrahi at the time.

"I said earlier this week that if I was a Scottish minister I would be looking at this again and reviewing it to see what I could do. If in Scotland they want the active support of the UK government in seeking information about him and supporting any representations they want to make about him, they will certainly get that very energetic support," he said.

Megrahi was technically released on compassionate grounds in 2009 when it was claimed he only had three months to live. However, his release is believed to have been part of a deal that the former British Cabinet of the Labor Party made with the Gaddafi regime.

An oil deal and trade concerns with Libya were at one point considered as factors in the Lockerbie bomber's release, then Justice Secretary Jack Straw said in an interview published in September 2011.

Ultimately, convicted bomber Abdelbeset Ali Mohmed al Megrahi was released on compassionate grounds because he is dying of cancer, a decision that Scottish, British and Libyan officials have said was not linked to oil or trade. However, Straw said trade and the interests of oil giant British Petroleum were factors in a 2007 prisoner transfer agreement between Britain and Libya that made the release of the Lockerbie bomber possible.

In 2001, Al Megrahi received a life sentence for the Lockebie Bombing - the blowing up of a Boeing 747 of Pan Am over the town of Lockerbie in Scotland, in which a total of 270 people perished, including 11 Lockerbie residents, and 189 US citizens.

Al Megrahi has terminal prostate cancer. He has been serving his life sentence in the Greenock Prison in Scotland. After serving 8 years, the then 57-year-old man returned as a free man to see his family.