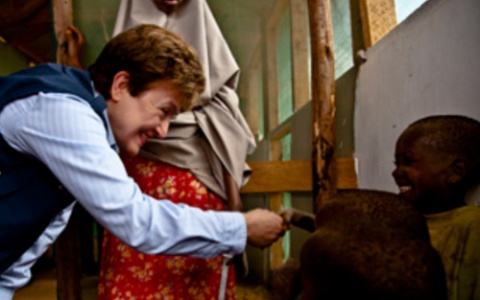 EU Commissioner for Humanitarian Aid Kristalina Georgieva is pictured here at a visit in the Horn of Africa in end-July 2011. Photo from ec.europa.eu/commission

EU Humanitarian Aid Commissioner, Bulgarian Kristalina Georgieva, has pledged EU support for the efforts of African governments to cope with drought and famine in the Horn of Africa.

Georgieva spoke Thursday at "The International Pledging Conference on Drought and Famine situation in the Horn of Africa", convened by the African Union in Ethiopia's capital Addis Abeba.

"To act fast, to give generously and to work together are the essential conditions for containing the famine, refugee and drought crises in the Horn of Africa. But African countries must also take long-term measures, with the support of the international community, to ensure that drought does not equal famine again," were the main messages of Kristalina Georgieva, the EU Commissioner for International Cooperation, Humanitarian Aid and Crisis Response, in Addis Abeba.

"I salute the African Union for addressing this crisis. Drought cannot be avoided, but hunger can - this is why it is essential that the immediate measures are combined with long-term support for sustainable livelihoods," Commissioner Georgieva said, cited by EC press service.

The AU conference gathered African governments and international donors with the aim "to provide an African response to an African problem". Commissioner Georgieva was one of the keynote speakers at the event and was due to hold bilateral meetings with Jean Ping, the AU Chairperson, Meles Zenawi, the Prime Minister of Ethiopia, and Mohamed Abdulahi Mohamed, the Prime Minister of Somalia.

The European Union has committed close to EUR 600 M to helping the suffering people of Ethiopia, Kenya, Djibouti and Somalia. Climate change, decades of civil war and under-development in the region have contributed to the first declaration of famine by the United Nations since almost a million Ethiopians starved to death in 1984. With famine expected to spread further across Somalia in the coming weeks, the crisis is deepening.

The EC says that no recovery is foreseen until next year because of the likelihood of late and below-average harvests, the depletion of pasture and water and soaring prices for staple cereals such as maize (which has increased in cost by 240%), water and fuel.

The combination of drought and conflict has been at its deadliest in Somalia, from where more than 135 000 people have fled this year. Thousands are pouring into refugee camps in northern Kenya and southern Ethiopia every week. Dadaab, in Kenya, is now the world's largest camp of its kind with a growing population of more than 400 000 people.

To respond to this emergency situation in the Horn of Africa, the Commission has allocated EUR 97.47 M in humanitarian aid to the Horn of Africa and is preparing to step up its support even further, bringing our humanitarian support to the drought-affected populations in the Horn to EUR 158 M this year. EU funds provide critically needed food aid, particularly to severely malnourished children, as well as healthcare and clean water, sanitation facilities and supplies.

It is vital that the global emergency response be scaled up rapidly to meet growing humanitarian needs and prevent further deterioration, the Commission's announcement reads.