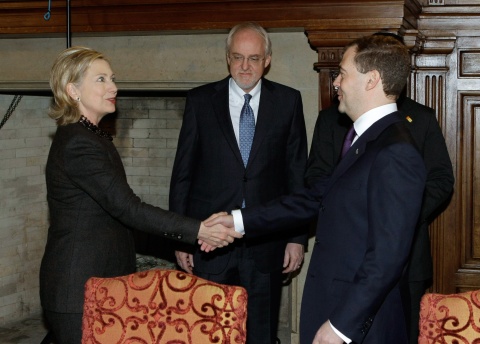 The following cable by John Beyrle, US Ambassador to Russia who was the US Ambassador to Bulgaria before going to Moscow, dated April 3, 2009, was released Thursday by WikiLeaks and their Bulgarian partner Bivol.bg.

¶1. (SBU) Summary: Russian policymakers are relying on Russia's competitive advantage in civilian nuclear power to help it diversify its natural resources-based economy. Atomstroyexport, Russia's international nuclear power plant constructor is diligently pursuing construction contracts for 11 new nuclear reactors in India, Iran, Bulgaria, and Ukraine. It is in active discussions on another six reactors (two in China and a Build-Own-Operate plant with four reactors in Turkey). At least four other countries have stated their interest in having Russian-design reactors as their entry into the nuclear power arena. However, the crunch on credit, insufficient machine-building infrastructure, and a paucity of trained specialists make it unlikely that Atomstroyexport will be able to realize all of these plans soon. End Summary.

¶2. (U) Atomstroyexport (ASE), Rosatom's international nuclear power plant (NPP) construction arm, is working on the 11 units to which it has committed:

-- (U) India - Kudankulam (two units under contract; four more being discussed): India's Kudankulam nuclear power plant (NPP) units 1 and 2 are almost finished, with projected first criticality expected in early 2009 and end of 2009 respectively. (Note: Initially, units 1 and 2 were expected to be commissioned in 2007. Delays in equipment delivery pushed dates for first criticality into ¶2009. End Note.) The December 2008 umbrella agreement signed with India puts four more reactors in the queue. The contract that is now under consideration will cover the delivery of design documentation and equipment only, with local Indian workers executing the construction. The Russian government has announced it will provide loans for this contract.

-- (U) Iran - Bushehr (unit 1): One load of nuclear fuel was delivered to the plant in early 2008 and is stored on site under IAEA monitoring controls. The date of commissioning has been postponed many times. Although it is hard to predict when first criticality will occur, most projections are for late summer or early fall 2009. It is most likely the reactor will be operated by Russian personnel during first year of operation. There are no indications of any Russian interest in building additional NPPs in Iran.

-- (U) Bulgaria - Belene NPP (two units under contract): Russia won the tender in October 2006 and a 'turn-key' contract was signed in 2008. The cost is currently estimated at 3.997 billion Euros (.4 billion). Construction is scheduled to begin in spring 2009.

-- (U) Ukraine - Khmelnitskaya NPP (two units under contract to be completed): The GOU approved the tender committee's decision in October 2008. ASE will finish the construction of two units, stopped in the 1990s due to economic reasons, that is at 75 percent and 28 percent complete respectively. Russia has announced it will provide a loan equal to 85 percent of the contact cost.

¶3. (U) ASE is aggressively pursuing new agreements and contracts in South America, the Middle East, and South Asia. It continues to expand its market in China, a long-term buyer of Russian nuclear goods and services, and is floating tenders in Turkey. If both the China and Turkey projects come to fruition, it would add another six NPPs to the 11 that are on the books.

-- (U) China: Russia and China began negotiating a contract on the further ASE construction of Tianwan NPP units 3 and 4 after units 1 and 2 were commissioned. The two sides are close to resolving pricing and technology transfer issues and the fuel delivery terms. Prime Minister Vladimir Putin and Chinese Premier Wen Jiabao signed a memorandum on cooperation in nuclear arena on October 28, 2008 on constructing these two additional units at the Tianwan site, a fast

breeder reactor, and a fourth centrifuge enrichment facility in China.

-- (SBU) Turkey: ASE was the only company that participated in Turkey's tender for the construction of its first NPP. Turkey's specialists are assessing ASE's proposal. Following the February 12-15, 2009 visit of Turkey's President Abdullah Gul to Moscow, ASE First Vice President Timur Ivanov on February 16 proposed a Build-Own-Operate (BOO) arrangement for four more reactors in Turkey. If the BOO model were followed, ASE would be plowing new ground because no country has ever entered into a BOO arrangement for an NPP. Director of ASE's External Affairs Division Leonid Yanko told EST on February 17 that not only would it be a first BOO, but that Russia would retain ownership for the lifetime of the reactor. The initial agreement would specify the price per kilowatt (Kw) for the first 15 years, with the follow-on period pricing negotiated on a market price basis. (Comment: If Russia owns the plant and runs it for the entire lifetime, Turkey would have little negotiating leverage to use in price negotiations after the 15-year point. End comment.) Former MinAtom Deputy Minister and now First Deputy Director General of the Institute of Natural Monopolies Problems Bulat Nigmatulin told EST on March 3 that such a BOO arrangement could hardly be profitable with the 15-year set price per Kw. He saw this as a showstopper. (Note: Practically all of Turkey's natural gas comes from Russia. This arrangement would deepen Turkey's dependency on the Russian energy sector, which some in Turkey oppose (Ref A). End note.) Nigmatulin told us that the tender could be cancelled for one of several reasons; the most likely being the high cost per Kw that Russia would charge for the electricity generated by the NPP and the uneconomically sound fifteen-year pricing scheme.

¶4. (U) Belarus: Rosatom announced its participation in a tender for the construction of a NPP, the results of which should be announced shortly. Belarus received preliminary proposals from ASE, China, Westinghouse-Toshiba, and Areva. Belarusian officials claimed preference will be given to Russia as it is the only country which proposed units that already have a "documented operational history." The project is expected to be executed using a GOR loan. (Comment: The loan probably has more to do with the decision than operational histories. End Comment.)

-- (U) Egypt: During his November 13, 2008 visit to Moscow, Egyptian Prime Minister Ahmed Nazif invited Russia to participate in the construction of an NPP. In March 2009, Russia and Egypt signed a Civil Nuclear Cooperation Agreement (123 Agreement).

-- (U) Venezuela: In September 2008, Prime Minister Putin announced that Russia was ready to build a NPP in Venezuela. During his visit to Venezuela, President Dmitriy Medvedev on November 26, 2008 signed a 123 agreement. On November 18, 2008, Venezuelan President Hugo Chaves announced that that a construction site had been selected for the NPP potentially to be constructed by ASE.

-- (U) Libya: On November 1, 2008, Russia and Libya signed an agreement on cooperation in the area of the peaceful use of nuclear energy, with emphasis on reactor design, construction, and nuclear fuel supply. The agreement did not specify what types of reactors (research or energy-producing) were agreed upon or when such work might be discussed.

-- (U) Mongolia: On March 17, 2009 Interfax reported that negotiations between PM Putin and Mongolian Prime Minister Sanjaa Bayar would result in Rosatom and the Mongolian nuclear energy administration signing an agreement on the peaceful use of nuclear energy. No specifics were given. However, ITAR-TASS reported on May 26, 2008 that Mongolia has forecasted uranium reserves of 1.3 million tons and that uranium mining, not selling nuclear power reactors, seems to be Russia's interest in Mongolia.

discussed long-term cooperation between Russian nuclear fuel fabricator TVEL and Hungary's Paks nuclear plant. If the contract is concluded, TVEL would provide fuel through at least 2032. Additionally, ASE would implement a program to upgrade the Paks NPP to increase its output from 1760 to 2000 megawatts.

-- (U) Armenia: There are also rumors of possible deals in Armenia (Ref B). Since 2007, Russia has repeatedly indicated interest in competing in a tender for construction of a NPP, which the Armenian government has indicated will be issued later in 2009. On February 5, 2008, Armenia joined Russia's International Uranium Enrichment Center (IUEC) in Angarsk. After February 6, 2008 talks between visiting Russian Prime Minister Viktor Zubkov and Armenian Prime Minister Serzh Sarkisyan, Rosatom and the Armenian Ministry of Ecology signed a protocol on joint geologic exploration, uranium ore mining, and processing.

¶5. (SBU) ASE's Yanko told us that while the economic situation isn't affecting ASE yet, i.e. no one has been laid off; there is a danger in the longer term because of the number of construction projects depending on GOR loans. When asked if ASE could cover all of its current and projected projects, he said that the China, India and Bushehr projects were "no problem." As for the other projects, Yanko commented, "well, maybe if all goes well." Yanko stated that the Middle East was shaping up as a good market, ripe for expansion, especially the United Arab Emirates, Bahrain and Qatar. He added that cooperation agreements and national legislation will have to be in place before anything can go forward.

¶6. (SBU) Yanko said two pathways are being explored to address insufficient Russian machine building capacity and related infrastructure needed to realize the projects. The first is to recreate the former Soviet nuclear mega-entity, Atommash. This would put the manufacturing of all the main components, such as reactor core pressure vessels and high-pressure pumps, under the Rosatom umbrella. Nigmatulin separately told us that this is impossible economically because the few remaining components of Atommash are literally in ruins. The other approach is to invest in existing companies, but not attempt to own the entire process. Yanko cited the Izhora steel fabrication plant in St. Petersburg as an example of this. Izhora is currently able to produce only one to one and one-half reactor pressure vessels per year. Yanko could not (or would not) say which solution the Rosatom hierarchy favors.

¶7. (SBU) Floating NPPS are another drain on ASE's expertise and materials. While the first two floating NPPs now under construction are for domestic use, Yanko did allow that financing and building floating NPPs could be an issue down the road. Although ASE isn't responsible for constructing them, it is the Rosatom responsible agent for floating NPPs sold internationally.

¶9. (SBU) Even without the crunch the financial crisis could put on GOR loans, the lack of sufficient nuclear industry infrastructure and trained specialists will make it hard for ASE to fulfill existing contracts on time. It is extremely unlikely that ASE will be able to complete many of the NPPs in contracts it is currently negotiating within the timeframes being discussed. Even so, ASE continues to seek still more new contracts. As Nigmatulin declared bluntly, "these plans are a fantasy."