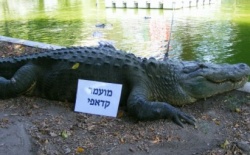 Muammar Gaddafi, a 230-kg crocodile living in the Hamat Gader crocodile farm on Israel's occupied Golan Heights, is to be given a new name.

As the world witnesses the violent ways in which Gaddafi the Croc's namesake is struggling to smash rebel forces in Libya, farm employees have grown concerned about the animal's safety.

A few months after Palestinian leader Yasser Arafat died in 2004, the crocodile named after him had the same fate, a representative from the farm has said, adding he did dont want to jeopardize Gaddafi's life too.

A new name is currently sought for the 3-meters-long and 36-years-old animal. The crocodile namesakes of Russian Prime Minister Vladimir Putin and his Italian counterpart Silvio Berlusconi are among his companions.

Naming crocodiles after world leaders and other famous people is spread not only in Israel, the Bulgarian BGNES news agency points out, giving the example of the two crocodiles living in a nature park in northern Australia, named after Prince William and Kate Middleton.