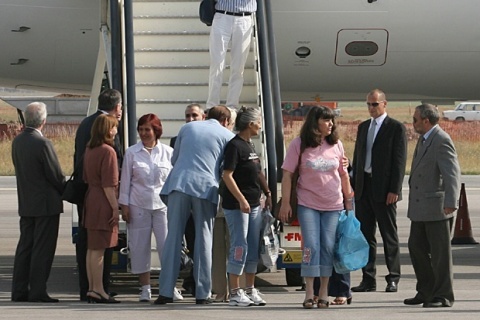 The 6 medics were released in 2007 after 8 years in prison. Photo by dariknews

Bulgaria's Prosecutor's Office has renewed the probe against the torturers of the six Bulgarian medics who were held in captivity for eight years in Libya during Muammar Gaddafi's regime.

The Prosecutor's Office started gathering new evidence on the case already in May, the Bulgarian Telegraph Agency has informed. The investigation had been stopped due to lack of collaboration on behalf of Libya's authorities.

The Libyan authorities had seized to collaborate on the case for 3 and a half years. Now, Bulgaria will want new legal assistance, which aims at identifying the torturers' identities, will be sent to Libya, apparently to the Transitional National Council.

The travesty trial of the Bulgarian medics in Libya was a clear act of blackmail from the very beginning. In 2007, Bulgaria completely wrote off Libya's debt to facilitate negotiations and obtain the release from jail of the six. In April, the father of a Libyan boy, who got infected with HIV in a Benghazi children's hospital in the late 1990s, has confessed that not the Bulgarian medics, but leader Muammar Gaddafi was behind the outbreak.

On Tuesday, Dr Zdravko Georgiev, one of the medics formerly jailed in Libya, said that if Bulgaria is a real country it must take steps to make sure that he and the five nurses are ultimately acquitted.

He further made it clear that he would not initiate court proceedings to prove his innocence if he had to do this all by himself.

On Monday, Bulgaria's Prime Minister Boyko Borisov declared that Muammar Gaddafi will be held responsible for the crimes he has committed against Bulgarians, as well as Libyans.

"Col. Gaddafi's regime was connected with Bulgaria in a painful way. We experienced many years anxiously awaiting [news] about the fate of our compatriots, and we are convinced that Muammar Gaddafi will be brought before the International [Criminal] Court in the Hague as a defendant for his crimes, including his crimes against the Bulgarian medics," Borisov stated.

On June 28, 2011, Bulgaria became the 19th sovereign nation to have recognized formally the Libyan rebels' National Transitional Council in Benghazi as the legitimate representative of the Libyan nation in international affairs.

The recognition of the rebels who have been fighting the regime of Libyan dictator Muammar Gaddafi since February 2011 came during a visit of Bulgarian Foreign Minister Nikolay Mladenov in Benghazi, the rebels' capital.

Bulgaria's Borisov Cabinet thus reversed its position as of March 2011 when it refused to recognize the National Transitional Council stating that some of its members were involved in the HIV trial.