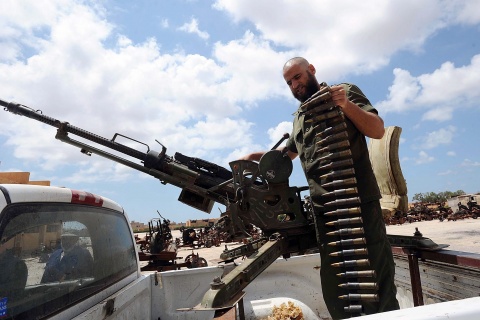 A Libyan rebel soldier is pictured preparing a machine gun set on a back of a pickup truck, at a rebel military base in Benghazi, Libya, 13 August 2011 EPA/BGNES

Libyan rebels' latest offensive to crush the forces of dictator Muammar Gaddafi, also known as the Battle for Tripoli, have led a number of nations to grant them recognition or to formalize their ties with them.

Nigeria, Oman, and Malta became the latest to grant Tuesday formal recognition of the rebels' Benghazi-based Transitional National Council as the legitimate government of the Libyans.

"In the last 48 hours, the situation in the country has moved inexorably closer to its denouement," a Nigerian Foreign Office statement said.

"The federal government is understandably anxious to prevent further loss of lives in Libya and therefore urges Muammar Gaddafi to take the part of honor and relinquish power immediately and allow the people of Libya to decide the future of their country," it declared.

Also on Tuesday, Oman became the latest Arab nation to break off relations with Libyan dictator Gaddafi and to recognize the rebel-led council.

The statement on Tuesday by Oman's Foreign Ministry also urged Libyan rebels to keep the country from drifting into lawlessness as opposition forces move against Gadhafi's last strongholds in the capital Tripoli.

Gonzi, who was among the last Western leaders to meet with Muammar Gaddafi before the popular uprising in Libya last February, said it was time for the embattled Libyan leader to leave and stop the bloodshed.

The Palestinian Authority also recognized the Libyan rebels on Monday

Kosovo, the youngest country in Europe (independent as of 2008), has also moved to recognize the new government of Libya hoping for a reciprocal gesture in the weeks to come, Kosovo's Foreign Ministry said.

Libya's other neighbor which so far experienced the one of the revolutions of the "Arab Spring" together with Egypt, Tunisia, extended formal recognition to the Libyan rebels on Sunday, just as the rebel forces staged a push on Tripoli.

On June 28, 2011, Bulgaria became the 19th sovereign nation to have recognized formally the Libyan rebels’ National Transitional Council in Benghazi as the legitimate representative of the Libyan nation in international affairs.