Gaddafi May Be Hiding in Bulgarian-Built Bunker 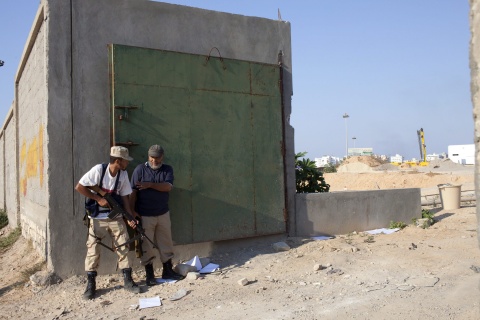 Rebels on the frontline near Bab Al Azizia, the main Gheddafi stronghold, in the Gorji area of Tripoli, Libya, on 22 August 2011, during the night after the rebels entered the city. Photo by EPA/BGNES

Libya's embattled dictator Muammar Gaddafi may be hiding in a bunker built by a Bulgarian company, according to a security expert.

The expert, who wanted to remain anonymous, has told the Bulgarian 24 Chasa daily that Gaddafi is likely to be hiding in one of the bunkers the Bulgarian Technoexportstroy built in Libya during the 1980s.

The Libyan strongman avoids using the more modern bunkers he has at his disposal, since he is aware that NATO has information about them, the expert has explained, giving the NATO attack on one of these facilities on April 30.

Therefore, the expert believes the dictator may have chosen one of the old bunkers, built by the Bulgarian company, hoping the information about them may have been "forgotten".

"The Bulgarian bunkers (in Libya) are so old that everyone has forgotten about them, including those who have built them. I can assure you that even Technoexportstroy's current manager has no idea that the company's dusty archives may contain the plans for them," he has pointed out.

During the communist regime in Bulgaria, the Balkan country had close relations with Libya. Technoexportstroy in particular is one of the Bulgarian companies that had very strong positions in Libya. Its activities included building underground bases and logistic corridors, among others.

On Tuesday, a Libyan oppositional TV stated that Gaddafi would be arrested within hours.