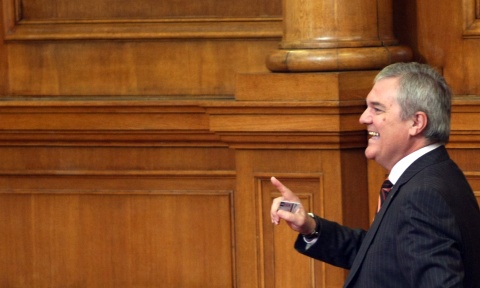 Former Interior Minister and left-wing MP Rumen Petkov has said that Customs Agency Director Vanyo Tanov belongs in jail for his treatment of the Lukoil license saga. Photo by BGNES

Tanov came under fire for his handling of the Lukoil license saga.

In a Monday interview for Nova Television, the left-wing MP and former Interior Minister in the Socialist-led three-way coalition government in 2005-2008 insisted that the state had demonstrated its "criminal capacity to strike without lawful grounds" through its treatment of the Lukoil case.

"In the course of several months we witnessed two mutually exclusive actions. First an ordinance was revoked and the introduction of cash registers in stores was delayed by a year. Then, when Lukoil failed to to observe a deadline, it faced openly repressive measures", Petkov argued.

"Then came the paradox of the Customs Agency Director declaring that he would not abide by a court decision. He delayed the implementation of the ruling of the Administrative Court Sofia City by over 30 hours. This means losses for Lukoil and profits for smugglers", the socialist MPS explained, referring to the restart of the Burgas-based refinery after the cancellation of the Customs-Agency ordered preliminary execution of the operations halt.

Petkov further said that the decision to close the customs office at the Rosenetz oil terminal meant that the state was no longer interested in the volumes of crude oil processed at the refinery.

He also noted that the decision to check tankers using mobile groups served as an indication to smugglers as to which days they could use to freely carry illegal cigarettes, alcohol and other goods into the country.

"Vanyo Tanov deserves to go to jail for his criminal way of thinking. If those currently in power fail to do this, I will refer the matter to the Chief Prosecutor", he stated, adding that the Customs Agency head had to be dismissed and brought to court for his actions, while Energy Minister Traicho Traikov had to leave office for tarnishing the image of Lukoil.

"Lukoil most likely made donations to the Interior Ministry and it probably contributed equipment and fuel. During my term in office, Lukoil donated computers to the organized-crime unit", Petkov said, rejecting allegations that the Bulgarian Socialist Party (BSP) had accepted donations from the refinery.

On the topic of the donations received by the Interior, he said that the issue was "very delicate" and cautioned against hurried decisions before the state managed to secure the work of the institution.