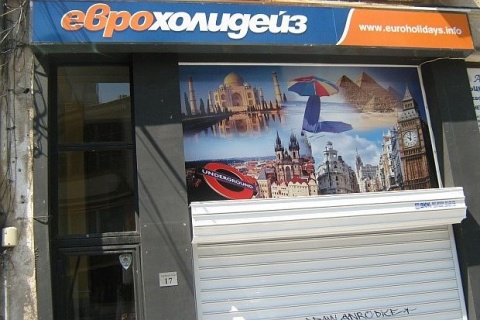 The Plovdiv-based Euro Holidays company is investigated for an online scam to offer fake exotic vacations. File photo by DarikNews.

The Director of the Plovdiv Regional Office of the Bulgarian National Directorate for Building Control, DNSK, Dimitar Katsarski, has been a partner of the alleged mastermind of a large-scale internet shopping scam.

An estimated 225 people from all over the country have paid between BGN 350 and 4 000 for fake vacations to the Maldives and Corfu offered by the Plovdiv-based company "Euro Holidays."

Venelin Kachakov, financial director of Euro Holidays, was the first one to be detained in connection with the case. He is among the top Plovdiv functionaries of the ruling Citizens for European Development of Bulgaria, GERB, party. GERB now say they want him to be expelled from their ranks.

Kachakov and Katsarski have been partners in the "Breg Consult" company, also based in the second largest city in the country. Another partner in the consulting business is the lecturer at the Plovdiv Agriculture Academy, Stefan Shilev.

The DNSK Head had transferred its shares to Kachakov in May, 2011. All three are GERB members and supporters, but Katsarski and Shilev insist they are not close to Kachkov, who is also known in Plovdiv as Venko The Fraud.

"I still cannot believe this happened. This is a blow to us," Shilev is quoted saying, pointing out "Breg Consult" actually never had any business activities over the fact the partners have been too busy with other work. A check in the trade register showed the company, created with the goal to offer consulting on EU-funded projects, is still in existence.

Katsarski also stood behind this explanation. Both insist they never knew anything about Kachakov's other activities.

In addition to Kachakov, consultant, Georgi Pasev, and the registered owner of the company, Georgi Hristov, are also under arrest. All three are charged with large-scale fraud.

Meanwhile, the collective shopping internet site Grabo announced it will reimburse Bulgarian defrauded by the Euro Holidays company with a total of BGN 145 000.

Grabo informs that the sum equals the price offers advertised on their site – those who purchased a vacation to the Maldives will receive BGN 999 each while those who booked Corfu – BGN 350. The collective shopping company will then sue Euro holidays for damages.