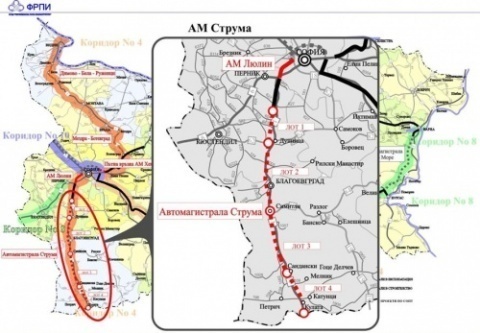 Struma Highway (in black) is a crucial section of Pan-European Transport Corridor No. 4. Map by web.hit.bg

Bulgaria's Minister of Regional Development and Public Works, Rosen Plevneliev, is attending Friday the opening of the public tender bids for Lot 4 of the Struma Highway.

The news was reported by the TV channel bTV.

Lot 4 runs between the southern town of Sandanski and Kulata on the Greek border and is 15 km-long. The investment amount is estimated at EUR 53 M, and it is financed by the EU operational program Transport.

The total length of the highway is slightly over 173 km.