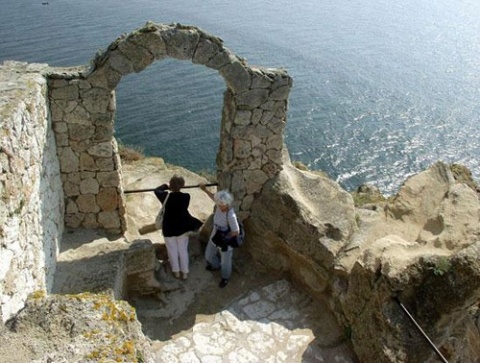 The archeological excavations at the Bulgarian Black Sea Kaliakra cape have been renewed at the beginning of August, immediately yielding more artifacts.

The information was reported by the Head of the archeological team, Boni Pertunova, from the Bulgarian Academy of Sciences (BAS).

Until now, the researchers have already discovered 20 gold objects – mostly jewelry as well as silver jewelry. They were located inside a necropolis and date from the 12th-14th century. The most interesting find has been a golden earing with two exquisite pearls, Petrunova explains.

43 tombs have been found in the area of the so-called Church 2 in Kaliakra. The most precious find there is a stamp with the portrait of the Virgin Mary, discovered on August 15th, the very same day when the Christian world celebrates the Dormition of Mary. The stamp also has the monogram of its owner – a wealthy, prominent person.

The latter find proves that in the 5th-6th century local residents wrote plenty of documents and correspondence, history experts say, pointing out the stamp is extremely rare and even unique.

The excavations will continue at least until the end of the month since there is still a lot to research, Petrunova reports.

The work of her team is financed by the Town Hall of the Black Sea city of Kavarna.