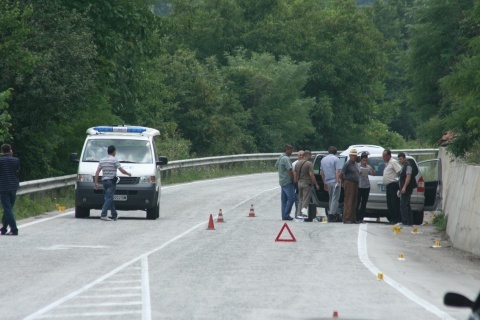 mage from the site of the shooting on the Veliko Tarnovo - Stara Zagora road. Photo by BGNES

Bulgarian businessman, Atanas Atanasov, who sustained serious injuries in a gun attack, is most likely a victim of the competition or former colleagues.

The information was reported by the Veliko Tarnovo-based Borba daily.

The newspaper writes that the businessman was carrying BGN 16 000 on him at the time of the attack, but the assailants were told he had BGN 80 000.

After being detained they gave the police BGN 10 000, saying they spent the remaining BGN 6 000.

The Prosecutor in the case, Nikolay Iliev, is quoted saying the investigation is following all possible leads, including the involvement of a former coworker.

Three people were arrested on August 10 in the shooting case in the Hainboaz mountain pass in Bulgaria in which Atanasov sustained serious injuries.

One of the three arrested is a Guatemala citizen.

Atanasov, 45, was shot on August 3 after his car was ambushed while on a business trip to Stara Zagora. The bullets hit the car's tires and the man himself, causing massive blood loss. He was taken to the hospital in Veliko Tarnovo and listed in critical condition.

The assailants disappeared immediately after, driving away in another car.

At the time, there were reports that Atanasov might have been travelling with significant amounts of money related to his business.