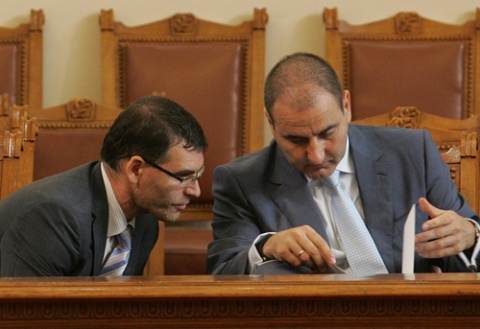 Bulgaria's two Deputy PMs - Finance Minister Djankov (left) and Interior Minister Tsvetanov (right) - appear to be frequently at odds with one another. Photo by Manager magazine

Bulgaria's Interior Minister Tsvetan Tsvetanov has snubbed his fellow Deputy PM, Finance Minister Simeon Djankov, shortly after the latter suggested that the 2012 state budget should redirect funds from the security sector to education.

"Simeon Djankov is not the person who will say how the budget of the nation will be distributed," Tsvetanov declared Tuesday afternoon, as cited by the Focus agency, as he was asked to comment on Djankov's statement from Tuesday morning.

"The major focus of the 2012 Budget Act will be the redistribution of funds from the security sector, which includes the Interior Ministry, the intelligence services, and the State National Security Agency DANS, towards science, education, and culture. We are paying more for security than the other European states, and less for education and science, while it needs to be the other way around," Djankov pledged speaking for Nova TV Tuesday morning.

After snubbing Djankov, Tsvetanov said that Bulgaria's budget for 2012 "should be at least as it was this year" without elaborating further what he meant.

"These are serious topics. I don't think that I can give you an answer about what he said. First of all, I didn't see him speak on TV," Tsvetanov is quoted as saying.

He did say that he had an understanding with Finance Minister Simeon Djankov that the budget should be at least as it was in 2011, apparently referring to the funding allocated for the Interior Ministry and the security services.

Tsvetanov, who just bowed to publish pressure over the notorious donations to the Interior made by private companies and signed an order to ban them, refused to say if he was going to seek compensations from the state budget in order to make up for the loss of the donations as a source of funding and asset acquisition for the Bulgarian police.

In his words, this is a matter to be discussed with the Prime Minister and the MPs from the respective committee, who are actually relevant figures on these issues.

"Look at what happened in Britain. You see how a country's image collapses when things get out of control. Let's not allow this to happen. As the Minister of Interior, I will work, I will strive not to allow such a development. There is no government sector with enough money but with what the Cabinet and the Parliament allocated to us in 2011 we will strive to cover all of our necessities," Tsvetanov explained.

Marginal media reports of the strained relations between Bulgaria's two Deputy Prime Ministers – Interior Minister Tsvetanov and Finance Minister Djankov – surface periodically. A notable example in hand were phone conversation tapes leaked to the public in January-February 2011 during the so called "Tapegate" scandal, which exposed antagonism between Tsvetanov and Djankov. The authenticity of the tapes in question was never fully proven or disproven.