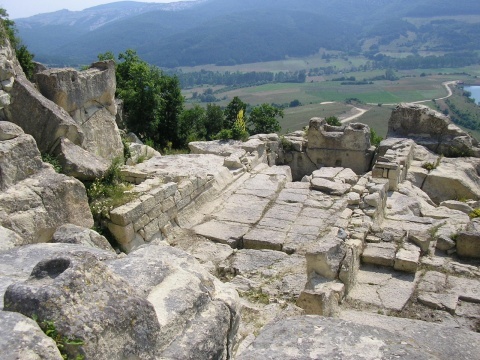 Pictured: the most famous sanctuary in the eastern Rhodopes – the ancient Thracian rock city of Perperikon in Southern Bulgaria. Photo by BGNES

A Thracian rock sanctuary from the 5th century BC has been discovered in the Rhodope Mountains by Bulgarian archeologists.

The sanctuary is in the "Kaleto" fortress site, near the village of Koshnitsa in the region of the southern city of Smolyan. This is the third Rhodope Mountain fortress with a similar find, according to Nikolay Boyadzhiev, archeologist with the Smolyan museum.

The digs have taken a month and have been financed by the Smolyan City Hall. The archeologists found an inside space, attached to the fortress wall, which they believe had been a watch room. The entire wall, well-preserved up to 2 meters high, has also been discovered.

The fortress has an area of 2 000 square meters with 80 meters of wall revealed so far. It has been built in the 6th century AC by the Byzantine emperor Justinian to safeguard the central Roman route from the Rhodopes to Greece. The researchers also found that the fortress has been set on fire at the beginning of the 7th century by Slavic tribes.

As far as the most recent find – the sanctuary, it did function until the beginning of the antique period while the fortress had been used all through medieval times and had been inhabited after the 10th century, Boyadzhiev, cited by the Bulgarian Trud (Labor) daily, says, pointing as proof the large number of ceramic remnants from different historical periods. Full-scale research at the site will begin in September under a joint project of the Smolyan Town Hall and partnership with neighboring Greece.