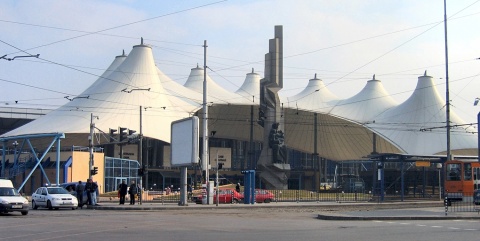 The questionable huge tent before the Sofia Central Railway Station installed in 2002 at a dear price for the municipality will now be removed. Photo from Wikipedia

Sofia Municipality is taking a number of measures to revamp the public city transport in order to make a better use of the second line of the Sofia Metro that is to be launched in 2012, officials have announced.

In early 2012, the municipality will start the reconstruction of the underpass of the Sofia Central Railway Station, which will feature a metro station and an underground connection to the Sofia Central Bus Station located nearby, announced Sofia Chief Architect Petar Dikov, as cited by the Monitor daily.

At present, the underpass connecting the railway and bus stations is closed, and so is part of the underpass of the Central Railway Station, which has been seeing constant but questionable renovations in the past 20 years.

One example of those is the revamping of the underpass in 2002 under former Sofia Mayor Stefan Sofiyanski, which cost the municipality BGN 20 M. The major results of these repairs were the building of stores most of which were never rented and the placement of a giant tent in front of the station. According to Dikov, however, the tent will now be removed because it is a safety hazard in the winter months when it accumulates snow.

Two other public transport projects in Sofia inspired by the upcoming launch of the second metro line, which will run from the Obelya and Nadezhda quarters to the Lozenets quarter via the railway station and the downtown, have to do with the rehabilitation of tram lines.

The Sofia Municipality will seek EU funding under the Regional Development Operational Program for the restoration of the tram line from the Darvenitsa Quarter to Lozenets, Sofia Deputy Mayor in charge of transport Lyubomir Hristov has announced, as cited by Focus. The tram line in question used to exist 20 years ago.

The other new tram project is the rehabilitation of the tram line running along the Bulgaria Blvd, which will link the southwestern parts of Sofia to the metro station at the National Palace of Culture.