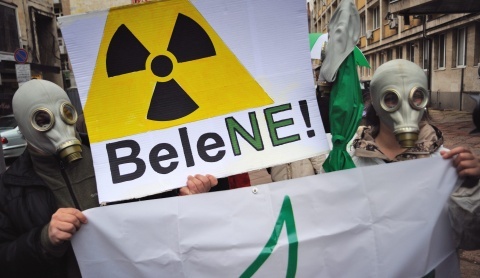 Members of several environmental organizations protest against the government`s plans to build second nuclear plant near town of Belene 19 March 2011. Photo by EPA/BGNES

The best thing Sofia and Moscow can do is give up their court battles over Belene nuclear project and draw the curtain on it peacefully, Bulgaria's former ambassador to the Russian capital has said.

"The way it is now, this project is impossible to implement and it is high time that it is frozen officially and forever," Iliyan Vassilev, an economist and former ambassador in Russia, told journalists.

Meanwhile Atomstroyexport offered Bulgaria a new extension of the contract for the construction of the Belene nuclear power plant, amidst continuing haggling over the project's price.

"A lawsuit at the arbitration court is no tragedy, but it is weird to have to fight in court and hold negotiations at the same time," Vassilev said.

According to him the final decision for the fate of the project will be wholly political since the consultants – HSBC – can not be expected to come up with a definitive and one-sided conclusion about its feasibility.

"No western bank will agree to finance Belene since the project does not meet the so-called Equator Principles for project management, which were introduced by the International Finance Corporation, a structure of the World Bank, and require an analysis of its socio-economic and environmental impact."

Belene is one of several huge energy projects that Bulgaria's previous Socialist-led government has used to tie Bulgaria very closely to Russia.

Along with Bulgaria's dependence on Moscow opponents cite the cost of the Belene project – which may well exceed seven billion euros, making electricity exports unprofitable – environmental risks and the danger of seismic activity in the region.

They also say that for a country that has suffered from the Chernobyl disaster and decommissioned several nuclear reactors over safety concerns and for a government, which has vowed to sever ties with Russia, Bulgaria's pursuit of atomic energy is illogical at best.