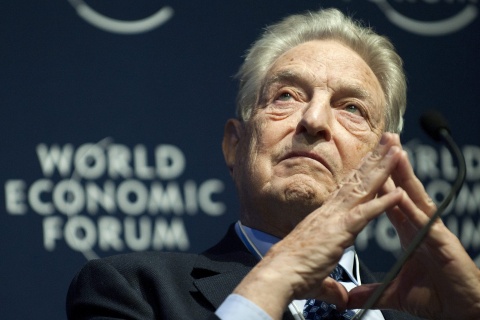 George Soros, Chairman of Soros Fund Management speaks before a panel session at the 41st Annual Meeting of the World Economic Forum, WEF, in Davos, Switzerland, 27 January 2011. Photo by EPA/BGNES

"It was the German indecision that intensified the Greece crisis and led to the contagion that has transformed it into an existential crisis for Europe," Soros wrote in the prestigious business daily Handelsblatt on Friday.

Soros called on the German government to agree on the issue of euro bonds to prevent a euro implosion.

"Only Germany can reverse the dynamic of a European decay," Soros wrote in the Dusseldorf-based newspaper. "Germany and other countries with a AAA rating have to approve some sort of euro-bond regime. Otherwise, the euro will implode."

The current system of rescue packages for individual counties such as Greece was unsustainable. It meant Italy and Spain had to pay higher interest for their state debt than they were receiving from Greece for the emergency credit they supplied.

Merkel's policy of small steps was too slow, he said. "The next step" should be an expansion of the European rescue fund.

"But by the time we get there, France's AAA rating could be in danger," Soros warned.