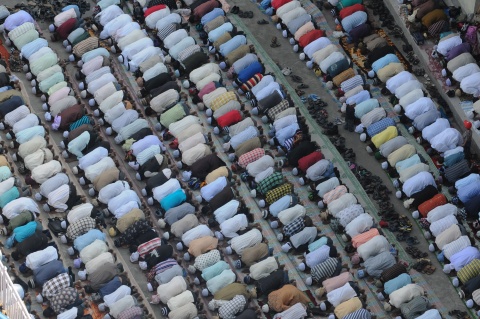 Muslims attend the morning prayer during the religious festival Eid-al-Fitr. Photo by BGNES

Muslim population in many big European cities already exceeds 20%, according to Alex Alexiev, an expert in international security and radical Islam and visiting fellow at the Hudson Institute, Washington, D.C.

In his words, however, what is especially worrying is that these Muslims are getting radicalized.

The expert reckons that almost all Western European countries are marked by a high degree of radicalization.

"Unlike our Muslims from the Balkan Peninsula, they are much more prone to radicalization because the religious organs in Western Europe, the Muslim religious organs, are controlled and commanded by radical Islamists, subsidized/financed by Saudi Arabia and other places, and preach the ideologies of the Muslim Brotherhood and etc", Alexiev explains in an interview fir the Focus news agency.

According to him, it seems to escape public notice that almost all Muslims in Western Europe are people residing in big cities.

"Muslims in rural areas and small towns are hard to find. If we take the city of Marseille as an example, the Muslim population there exceeds 30%, the share of the young generation below 20 years of age is already above 50%, meaning that Marseille is on its way to become an exclusively Muslim city. The same applies to Amsterdam, Rotterdam, Malm?, and Antwerp", the expert says.

He also notes that there is a region in the very heart of London where the Muslim population below 20 years of age constitutes a majority and where radical elements are quick to creep in.

According to Alexiev, the unrest in London in the past few days involved people of Caribbean origin, African-Americans, etc, as well as many people with big beards and no moustaches, which is typical of Islamists - they keep their beards but cut their moustaches short.

"These things are not accidental", he concludes, stressing that this community to a large extent fails to recognize European culture, is unwilling to integrate and poses a huge threat for the future.