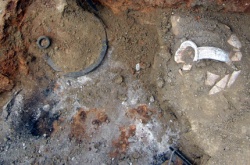 The area around the village of Mogilets in northeastern Bulgaria abounds in precious archeological finds. Photo by BGNES

Bulgarian archeologist announced Friday the latest precious and unique finds in the country, discovered near the village of Mogilets in the area of the town of Omurtag in northeastern Bulgaria.

100 objects have been found during the digs of 5 tombs.

The area around Mogilets is the most researched in the entire Targovishte region because it has a large number of mounds and a villa, dating from Roman times, as a geo-magnetic test had shown.

The place is also among the very few in Bulgaria that have been spared from illegal treasure hunters.

Archeologist, Stefan Ivanov, quoted by the Bulgarian new agency BGNES, says four of the tombs are in close proximity to each other. The way the burials have been done leads to the conclusion the toms date from Thracian times.

The finds need to undergo restoration before being displayed for the public.