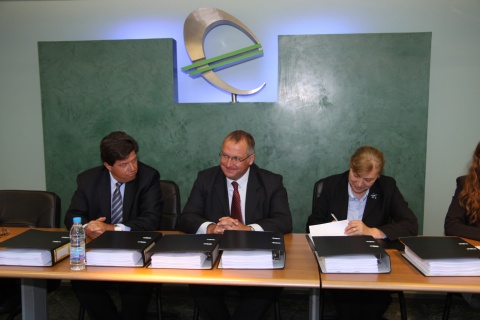 On behalf of the Consortium Penspen Ltd - C&M Engineering SA John Attrill (in the middle)- Director of Penspen and the Executive Officers of „ICGB“ AD Juliana Dimitrova and Antonis Natsikas signed on Thursday (August 11th, 2011) a contract for the natural

A contract signed Thursday has become a "decisive" first step for the construction of the natural gas grid interconnection between Bulgaria and Greece, the Bulgarian Energy Holding announced.

The contract for the Front End Engineering Design (FEED) and Environmental Impact Assessment (EIA) for the connecting of the natural gas grids of Bulgaria and Greece was signed between "ICGB AD", a joint Bulgarian-Greek government venture, and a consortium of Penspen Ltd. and C&M Engineering S.A.

The consortium was awarded the contract as a conclusion of an international tender issued in January 2011.

In November 2010, Bulgaria and Greece signed Tuesday a contract for the interconnection of their natural gas networks that must be built by 2013; the agreement was concluded between the Bulgarian Energy Holding and the Greek company IGI Poseidon.

Each of the two companies will have a 50% share of the project, which is estimated at EUR 170 M, EUR 45 M of which come from EU funds.

Bulgaria's Economy and Energy Minister Traicho Traikov has vowed that the first amounts of gas will flow in the interconnection pipe early 2013.

"By signing this contract the project "Interconnector Greece - Bulgaria (IGB)" enters into a decisive phase. The provision of the FEED and EIA services will commence at the end of August," the Bulgarian Energy Holding, a state-owned corporation said.

It further announced the Bulgaria-Greece gas pipeline will be completed in the fourth quarter of 2012.

The interconnector IGB is a 170km long pipeline with a transit capacity of 3 billion cubic meters per year (bcma) which could be increased to 5 bcma, with reverse flow capability. The project  will connect Komotini (Greece) and Stara Zagora (Bulgaria).

"Тhe interconnector IGB is a project of strategic importance for Greece and Bulgaria, since it reinforces the security and provides diversification of supply in Southeastern Europe," BEH pointed out.

"The realization of IGB together with the development of the Turkey-Greece-Italy (ITGI)  gas supply corridor, will  enable the delivery of Caspian and Central Asian gas to Southern-East Europe from as early as 2014. The Interconnector will provide also the opportunity to supply liquefied natural gas from LNG terminals in Greece and Turkey," the Holding said further.

The IGB project has already secured EU co-financing of EUR 45 M under the European Energy Program for Recovery.

The "ICGB AD" company was established on January 5, 2011, in Sofia with the purpose of implementing and operating IGB pipeline.

The consortium of Penspen Ltd and C&M Engineering S.A. has worked on several projects in the region. Penspen is an independent group of companies providing studies, engineering, project management, operations and maintenance and integrity services to the Oil and Gas Industry for pipelines, transportation, storage and production facilities, both Onshore and Offshore. The Penspen Group has more than 1400 staff worldwide and has undertaken well in excess of 8000 projects in a wide range of technical and geographical areas.

Penspen's local partner C&M Engineering S.A is considered one of the most experienced consultancy and engineering firms in Greece, specializing in the energy sector, due to its portfolio of large, complex energy projects.