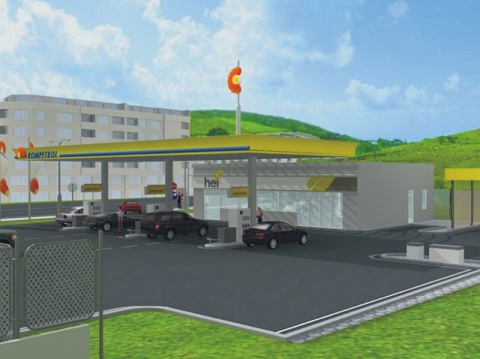 Rompetrol plans to have 63 gas stations in Bulgaria by 2012. Photo from archconproject.bg

Romanian oil company Rompetrol has opened its 58th gas station in Bulgaria, amidst plans to boost its presence on the Bulgarian market.

The newly opened Rompetrol gas station is located on the E79 road, 10 km north of the Kulata crossing point on the Bulgarian-Greek border.

By the end of 2011, Rompetrol Bulgaria AD plans to open 5 more gas stations in the country, bringing their total number to 63, Stanimir Smilkov, commercial director at the firm, said in a statement.

All fuel sold by Rompetrol in Bulgaria is imported from the Petromidia refinery in the Romanian Black Sea port of Constanta. Rompetrol has recently moved to boost the capacity of the refinery, bringing it to 5 million tonnes annually as of the start of 2011, from the current 3.8 million tonnes.

This investment is expected to reach USD 377 M in a bid to make Petromidia one of Europe's top 25 refineries, the company says.

Back in 2007, Rompetrol was purchased by the state-owned oil company of Kazakhstan, KazMunayGas, from the owner Dinu Patriciu for USD 2.7 B. KazMunayGas's Rompetrol Group has operations in Romania, France, Spain, Russia, Ukraine, Hungary, Bulgaria, Serbia, Montenegro, Moldova, and Albania. In Bulgaria, Rompetrol is the third largest oil company with a market share of about 15%.