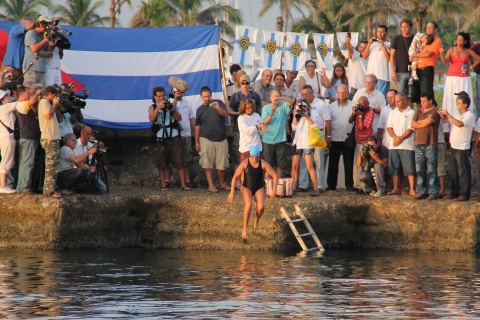 US swimmer Diana Nyad began her challenge of swimming about 166 kilometers between Cuba and the South of Florida, in a period of three days, without a cage to protect her from sharks, 07 August 2011. Photo by BGNES

US swimmer Diana Nyad, 61, will try to swim a distance of about 166 kilometers between Cuba and the South of Florida without a cage to protect her from sharks.

Nyad plunged into the water for the start of the marathon at 7:45 p.m. ET on Monday at the Marina Hemingway International Nautical Club west of Havana.

She hopes to be able to reach Florida in about 60 hours.

On her journey she will be accompanied by a 45-member support team on 5 yachts, according to reports of CNN.

Nyad will not use a shark cage, but rowers in kayaks will use electric "shark shields" to frighten off sharks, which are abundant in the Florida Strait.

Every 45 minutes, she will stop for 20 seconds to drink water and energy drinks, and every 1.5 hours, she will stop moving her arms and ingest food or change her goggles.

The veteran open-water long-distance swimmer first attempted this swim in 1978 and had to stop after high waves and strong currents had pushed her too far off course.

In 1997, the distance from Cuba to Florida was covered by 22-year-old Australian Susan Marooney, who used a shark cage.

Nyad's swim is a symbolic gesture aimed at inspiring people to live vigorously during their golden years.

In her words, the attempt is also intended to boost understanding between the United States and Cuba, two nations torn by five decades of animosity and mistrust.