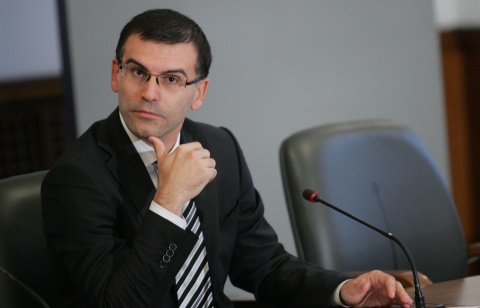 Deputy Prime Minister and Finance Minister, Simeon Djankov, says Bulgaria is an example to follow in dealing with the economic crisis. Photo by BGNES

The Bulgarian cabinet is establishing emergency headquarters to monitor financial markets in the US and Europe for threats of another economic crisis wave.

The headquarters are created on the order of Deputy Prime Minister and Finance Minister, Simeon Djankov, and include Deputy Finance Ministers, Vladislav Goranov, and Boryana Pencheva, experts from the Ministry's Analysis Department and from the Central Bank, BNB.

The headquarters will report to Djankov at the end of each work week. In addition, a team from the Ministry has started work on a "pessimistic and optimistic" scenario for the 2012 State budget, depending on developments on global markets. It is almost certain the next year accounts will include a relatively high inflation of 4-5%, the Bulgarian daily 24 Chassa (24 Hours) writes.

"All governments must have learned by now that they need stringent fiscal rules and disciplined fiscal policy. Every EU Member State can learn from Bulgaria's example. We were able to handle the crisis without outside loans, without raising taxes and having a huge deficit. We are on the right track and we will keep going in this direction," Djankov is quoted saying.

Meanwhile, PM Boyko Borisov, commented that Bulgaria would not attempt to join the Eurozone until all EU countries shrink their budget deficit to under 3%.

Borisov further says the downgrading of the US credit rating by S&P is a sign the current times are not times for populism, and assuages fears the US debt crisis would affect negatively EU funding for Bulgaria.

S&P, one of the world's three major rating agencies, failed to be impressed by a last-minute deal in the US last week to raise the US debt limit by up to USD 2.4 TN from USD 14.3 TN, saying a potential US government default on its debt was avoided, but only achieved after months of bickering between Democrats and Republicans in Congress.

The credit rating downgrade is seen as a major embarrassment for President Obama's administration. It could also raise the cost of US government borrowing.

An economic adviser to the White House condemned the S&P move.

"It smacked of an institution starting with a conclusion and shaping any argument to fit," said Gene Sperling, the head of President Obama's National Economic Council, cited by BBC.