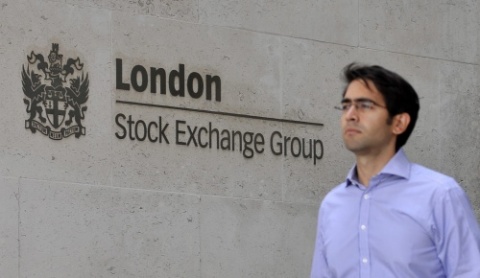 A London Stock Exchange employee exits the LSE in London, Britain, 05 August 2011. London stocks continued to tumble 05 August with investors worried about both the eurozone debt crisis and the strength of the US economic recovery. Photo by EPA/BGNES

News of better than expected figures about unemployment in the United States has failed to stabilize global stock markets, despite bringing some relief.

Following a sharp fall by about 4% in the morning on Friday, London's FTSE and Frankfurt's Dax temporarily bounced back on the news of better US jobless figures, but were soon down about 2% again by mid-afternoon.

Investors have been worried mainly by Europe's debt problems and the fact that changes to a key rescue fund agreed last month have not yet been enacted.

"Fears over the eurozone debt crisis have sent markets into free fall over the last few days, and although recently announced US employment data may give markets some short-term reprieve, these fears are likely to continue," the think-tank Open Europe said, as cited by BBC.

"The crisis in Europe is quickly becoming on par with the financial crisis of 2008," said David Levy, portfolio manager at Kenjol Capital Management, as cited by CNN.

The European Union has already given financial assistance to Greece and Ireland, two countries that have struggled to pay their debts.

A financial rescue package for Italy or Spain might be more than the group of countries can handle, analysts say.

Earlier on Friday, European Commissioner Olli Rehn said he thought the movements were "unjustified" and "incomprehensible".

Speaking to reporters, Rehn, who is Economic and Monetary Affairs Commissioner, tried to assure markets by saying the movements were "not justified by the economic fundamentals", particularly in Italy and Spain, the latest focus of investors concerns.

"The political will to defend the euro should not be underestimated," he added.

He stressed that measures to improve the scope and effectiveness of the 440bn-euros rescue fund, the European Financial Stability Facility (EFSF), agreed last month, should be in place by September.

On Thursday, European Commission President Jose Manuel Barroso called on eurozone countries to approve those changes as soon as possible, but also to consider expanding the fund further.