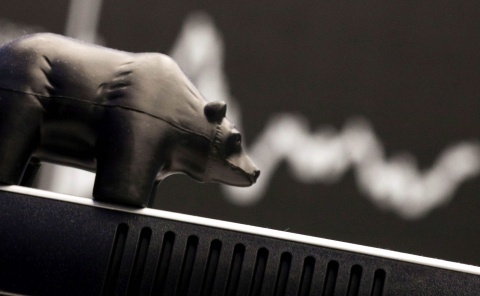 The Bulgarian bourse indices fell sharply on Friday as the stock markets in Asia and Europe recorded sharp declines, while Wall Street had its worst day since the 2008 financial crisis.

The slump affected most heavily financial stocks - First Investment Bank lost 7.8%, while Central Cooperative Bank - 2.7%. The Varna-based TIM group's holding "Chimimport", in whose portfolio financial firms, including CCB, account for a serious share, plunged by more than 8% shortly after 10 am on Friday. The shares of Eurohold Bulgaria followed a similar trend, albeit with a more modest plunge of 7.56%.

Big industrial companies were also among the biggest losers - HES, EMKA and Sviloza lost 7.5%, 5.66% and 8.40% of their value respectively.

The shares of such a key player as Monbat remained nearly intact as they fell by just 3%.

The Bulgarian market recovered slowly in the course of the day as global markets rallied on the news that the US economy added 117,000 jobs in July and unemployment fell slightly to 9.1%.

The developments on the Bulgarian stock exchange came after the Dow Jones Industrial Average fell more than 500 points, the main reason being the investors lack of faith in the potential revival of the global economy.

On Thursday, the Dow closed down 512.76 points, at 11,383.68, as the day saw the biggest sell off in US stocks since the 2008 banking crisis due to fears of a double dip recession and Europe's financial crisis.

Oil prices continued to fall, as fears of a global economic slowdown hit prices of commodities.

The prices of both US and Brent crude have fallen by more than 10% this week. Benchmark light sweet crude reached the lowest price since November last year.

The European Union has already given financial assistance to Greece and Ireland, two countries that have struggled to pay their debts.

A financial rescue package for Italy or Spain might be more than the group of countries can handle.

European Commissioner Olli Rehn said he thought the movements were "unjustified" and "incomprehensible".

Speaking to reporters, Rehn, who is Economic and Monetary Affairs Commissioner, tried to assure markets by saying the movements were "not justified by the economic fundamentals", particularly in Italy and Spain, the latest focus of investors concerns.

"The political will to defend the euro should not be underestimated," he added.

He stressed that measures to improve the scope and effectiveness of the 440bn-euros rescue fund, the European Financial Stability Facility (EFSF), agreed last month, should be in place by September.

On Thursday, European Commission President Jose Manuel Barroso called on eurozone countries to approve those changes as soon as possible, but also to consider expanding the fund further.