The Bulgarian Table, from Sudjuk to Shopska 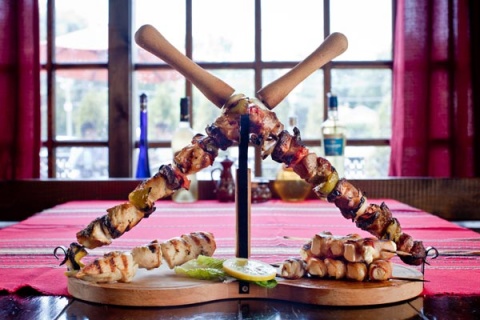 The Chicago area is home to the largest Bulgarian population outside of Bulgaria. Over the years nearly 20 different Bulgarian restaurants and specialty shops have sprung up in and around the suburbs where most Bulgarian-Americans reside: Schiller Park, Des Plaines, and Mount Prospect.

Mehanata (1141 Lee, Des Plaines, 847-824-0100), a popular Bulgarian restaurant, has the traditional dark wooden tables with blood-red tablecloths topped with wooden overheads entwined with grapevines. Owners Ivan and Nina Tsvetkov and Maria and Rumen Kovachev resurrected the restaurant three years ago, hiring an all-Bulgarian staff, working with as many different Bulgarian food distributors as they could, advertising in the Bulgarian papers, and hosting musical events. As Nina Tsvetkov says, "We didn't come here with a big plan to have a restaurant, but the opportunity presented itself. . . . I think what we did is create a small, cozy corner of Bulgaria here in Des Plaines for people—not just Bulgarians—to enjoy."

Bulgarians do love their meats: slow roasted, cured and smoked, grilled and baked. A staple meze is the hard, spicy, horseshoe-shaped and flattened beef or pork sudjuk, a dried, smoked pork sausage round similar to Spanish serrano ham. Mehanata's massive menu is consistently well executed in the meat area, impressively re-creating authentic dishes such as deliciously chewy sauteed chicken hearts with lemon and parsley over a bed of mushrooms or salty, juicy, tender roast lamb falling off the bone.

One of Mehanata's house specialties is the shashlutsi, a pair of swordlike, crisscrossed metal skewers stabbing considerable chunks of smoky pork and chicken. Kebabcheta, kebabs of ground meat seasoned with cumin and molded into long sausagelike shapes, are available ready for the grill at Minos Imported Foods (648 W. Lake, Addison, 630-543-0337, minosimports.com) or Malincho Euro Market and Deli (1475 Lee, Des Plaines, 847-298-3333, malincho.com), as are kufteta—meatball-shaped ground beef and pork patties with parsley, onion, and beaten egg. Seafood is immensely popular around the Black Sea, particularly fresh mussels and fish. Dried mackerel is also very popular—you can buy it canned at Malincho.

Most Bulgarians grow up drinking fresh raw goat and cow's milk and eating white-brined cheese and yogurt, which dates to 3,000 BC and originated in Bulgaria. There isn't a Bulgarian without a visceral dependence on banitsa, filo dough layered like a lasagna with white-brined cheese and beaten egg and brushed with melted butter—or one who won't tell you his grandmother made the best one. Beograd Cafe and Meat Market (2933 W. Irving Park) makes an excellent Serbian version of banitsa called burek. A sweeter adaptation called tikvenik (from tikva, pumpkin) is created by filling rolls of phyllo dough with roasted pumpkin and walnuts, then covering it with lots of powdered sugar. True Bulgarian yogurt is hard to find, but you can make your own; for a recipe see the Food Chain.

Salads are integral to every meal, from the classic shopska (tomatoes, cucumbers, roasted red pepper, green onions, parsley, and a mound of grated white-brined cheese) to a simple green salad with fresh radishes and cucumber. There are multiple variations, which may include ingredients like mushrooms, ham, and kashkaval, the last a yellow sheep's cheese sometimes referred to as the cheddar of the Balkans, available at the Produce Center (5820 N. Milwaukee, 773-775-3200) as well as at Caputo's (among other locations, 2400 N. Harlem, Elmwood Park, 708-453-0155, caputomarkets.com). They're dressed simply, with a drizzle of olive oil or oil and vinegar.

Traditional bean stews are prepared with a favorite herb such as mint. Tarator, a perfect summer starter, is a chilled creation of yogurt, cucumber, dill, garlic, and chopped walnuts. Tripe soup, offal slowly simmered for hours in milk and water with red chile peppers and doused with a garnish of vinegar and chopped garlic, will cure any hangover. Roasted vegetables are taken to another level with luitenitsa, a roasted red-pepper-and-tomato spread that's low in calories and perfect with white-brined cheese on toasted bread. Kiopoolu, similar to baba ghanoush but much darker, is another favorite dip—diced, garlicky roasted eggplant with roasted red pepper, olive oil, and parsley.

A myriad of grape varieties are grown in Bulgaria to create astoundingly underrated wines like muscat, traminer, and mavrud. And then there's rakia. Where Mexicans have mescal and Italians have grappa, Bulgarians have this grape or plum brandy, homemade versions of which will put you under the table faster than you can say "Nazdrave!"