Kosovo Govt Adviser: Tension with Serbia Could Lead to War 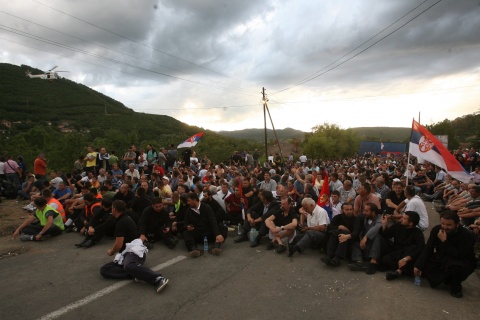 Kosovo Serbs wave flags while blockading the road in the village of Rudare near Zvecan, Serbia, on 29 July 2011. Photo by EPA/BGNES

If Serbia intends to break away a part of Kosovo, that could lead to a military conflict, stated Kosovo government adviser for foreign policy Azem Vlasi Wednesday.

Tensions in Northern Kosovo have been flaring for two weeks after the Serbian breakaway province and Serbia entered into a trade conflict, embargoing each other, while ethnic Serbian population in the north of Kosovo wreaked havoc on border checkpoints, mandating the introduction of Kosovar special police units.

"If Serbia intends to break away by force a part of Kosovo, it will meet the legitimate resistence that each country has the right to exercise, under international and domestic law, in order to defend its territory," said Vlasi, as quoted by Serbian acency Beta.

Since the start of the tensions, Kosovo authorities have consistently laid the responsibility of the unrest on the Serbian government.

Wednesday Kosovar PM Hashim Thaci again put the blame on Serbian authorities for allegedly instigating violence, and stated that Kosovo will not give in, much less accept a partition of its territory.

On his part, Serbian PM Mirko Cvetkovic in return put the blame on Kosovo authorities and international forces in Kosovo for allowing the unrest, and expressed Serbia's desire for the frozen bilateral talks with Kosovo to continue in a healthy climate.

NATO has already decided on a boost of its KFOR military presence in Kosovo, particularly the north, and fresh forces are expected on the ground Thursday.