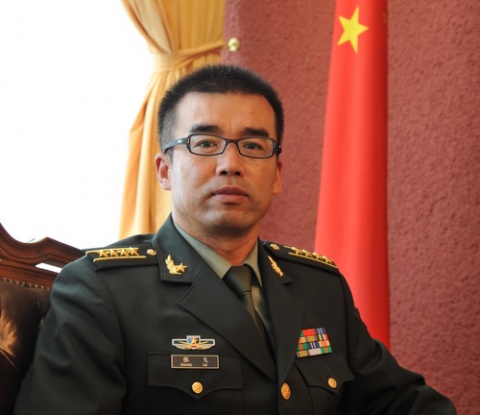 Interview of Novinite.com (Sofia News Agency) with Snr Col Zhang Ge, Defense Attach? of the People's Republic of China (PRC) to the Republic of Bulgaria, on the occasion of the 84th anniversary of the Chinese People's Liberation Army (PLA). The PLA turns 84 on August 1, 2011.

Snr Col Zhang got his PhD degree of military science in China's National Defense University in 2002. Before the post of Chinese DA to Bulgaria, he worked in Afghanistan for three full years (2007-2009) as deputy and acting Military & Air Attach? in the Chinese Embassy.

There is little knowledge in societies such as Bulgaria's about the development of the Chinese military. How is it planned to develop in the future?

Over the 60 years and more since the founding of the PRC, the modernization of the Chinese PLA has achieved major successes. It has grown from a single service into a strong military force featuring a range of services and arms, and is now beginning to make progress towards informatization.

According to the three-step development strategy laid down in 1997, the PLA has adopted a step-change approach which takes mechanization as the foundation and informatization as the focus.

The first step was solving the issues about the scale, structure, and system of the PLA by 2010.

The second step is to get the PLA basically mechanized and achieve considerable progress in its informatization by 2020.

The third step is to realize the modernization of the national defense and the PLA by the mid-21st century. In accordance with this strategy, China is making efforts to build a strong army that is capable of coping with crises, keeping peace, containing and winning wars.

How is the restructuring of the Chinese army carried out keeping in mind the new challenges in the 21st century?

Today's world as a whole sees an environment of peace and stability but the international security situation has become more complex. Security threats posed by such global challenges as terrorism, nuclear proliferation, insecurity of information, natural disasters and trans-national crime are on the rise, while traditional security concerns are blending with non-traditional ones.

Facing the new threats and challenges, the PLA has focused on the idea that it is necessary to be active in increasing its capabilities to meet various challenges and to be able to perform varying military tasks. And it has made relevant adjustment and preparations in the aspects of organizational structure, military training, logistics and international cooperation, etc.

I think that the various tasks of the PLA include both war actions and non-war military actions, with the latter including anti-terrorism, emergency rescue, disaster relief, sea escort, search and rescue and UN peacekeeping missions, etc. In the present international environment, the non-war military operations are gradually turning into the major form of using the armed forces.

To meet the new and changing needs of national security, the PLA will try to accentuate modernization from a higher platform, providing the necessary strength for defending the national interests and playing an important role in keeping international peace.

In the recent years, China's defense spending is growing. Would other states be justified should they think that this creates a threat for them?

Compared with other major countries in the world, China's defense spending as a percentage of the GDP has always been relatively low, averaging about 1.4% in the past few years.

China is a nation of 1.3 billion people with a vast territory and a long coastline, and the funds invested in defense are actually very limited.

China unswervingly takes the road of peaceful development and is pursuing a national defense policy which is defensive in nature. The development of China's military forces is prudent, moderate and fully focused on defending the sovereignty, security, and territorial integrity of the country. It is not directed against any state, and could not present a threat to any state.

There has recently been increase of tensions over territorial disputes in the South China Sea. Is that poised to create complications? For example, do you think that is going to affect the freedom of commercial sailing there?

China owns indisputable sovereignty over the islands and their adjacent waters in the South China Sea. This has been justified by historical facts and international law. China insists on solving disputes over the South China Sea with relevant ASEAN countries through peaceful dialogue and friendly negotiation in accordance with the international law.

The situation in the South China Sea at present is stable as a whole but there are some factors connected with outside influences. The common interests of China and the countries of the region are to preserve peace, to prevent the expansion and complication of the disputes there, and their acquiring an international character; to avoid the spurring of conflicts and tensions in this region.

China is against the intervention of foreign powers in the region of the South China Sea and is sticking to the position that the directly involved countries need to achieve a peaceful settlement of the existing disputes through bilateral negotiations.

These countries have free channels for dialogue and consultation among themselves; they have the wisdom and ability to solve their own problems with their own strength.

The free and safe shipping in the South China Sea as one of the busiest international sea routes has never been affected by the disputes in the region, and has never been problematic.

China is a permanent member of the UN Security Council. What type of UN peace-keeping missions is it involved in?

The Chinese forces are working on their tasks with much responsibility and professionalism. They have built and repaired over 8 700 km of roads and 270 bridges, cleared over 8 900 landmines and various explosive devices; they have transported over 600 000 tons of cargo across a total distance of over 9.3 million km; they provided medical aid to 79 000 patients.

Among the permanent UN Security Council members China is the country which has sent out the greatest number of participants on peace-keeping missions, and among the developing countries it is the one which has provided the largest among of money for such missions.

What is the participation of the Chinese navy in the anti-piracy operations for the guarding of shipping in the Gulf of Aden and Somalia's territorial waters?

In line with relevant resolutions of the UN Security Council, the Chinese government started to dispatch naval ships to conduct escort operations in the Gulf of Aden and waters off Somalia in December 2008. They are mainly charged with safeguarding Chinese ships and personnel and providing security for the ships carrying humanitarian aid under the UN World Food Program and other international organizations, and with all possible means to shelter pass-by foreign vessels in the region.

By June 2011, the Chinese navy has dispatched, in eight sorties, 20 ships deployments, 18 helicopters, over 6 700 soldiers and officers to carry out its escort missions that have provided protection for over 3 900 Chinese and foreign vessels, rescuing a total of 40 ships from pirate attacks.

Does China and its armed forces have the potential to achieve parity with the US Navy in the Western Pacific? Is that a strategic aim for the Chinese government?

China and the United States have extensive common interests and share important responsibilities in promoting peace, stability and development in the Asia-Pacific region. At present there are new opportunities for the two sides to further develop military ties, but there are challenges and difficulties as well.

We are willing to make joint efforts with the US side, in the spirit of "respect, mutual trust, equality and reciprocity", to further expand dialogue, foster and increase strategic mutual trust, respect and address each other's major concerns and push forward the bilateral military ties to develop in a healthy and stable way.

The modernization of the Chinese PLA does not take other military forces as reference but being carried out in view of its own reality and the needs of national interests in security and development.

China does not seek arms race with any country, nor does it aim at any country or any specific target with its developing military hardware. China's strategic purpose is always clear and transparent, which is sticking to the path of peaceful development and pursuing a national defense policy that is defensive in nature.

After developing with an accelerated pace after 2001, the military development within the Shanghai Cooperation Organization (SCO), which includes China, Russia, and Central Asian states, appears to have slowed down recently. What are China's plans with respect to the development of the SCO?

The Shanghai Cooperation Organization (SCO) aims at maintaining regional security and stability and promoting common development and prosperity among its member states. Within the SCO framework the joint counter-terrorism military exercises, either at bilateral or multilateral level, are being institutionalized and making an important content in the field of defense and security cooperation.

China and Russia as well as other SCO members ran a series of "Peace Mission" joint counter-terrorism military exercises in 2005, 2007, 2009 and 2010. The military exercises have played an important role in deterring terrorism, separatism and extremism in the region.

They are also conducive to deepening understanding and trust among the members, promoting the armed forces building and improving the capabilities of SCO joint actions against new threats and challenges.

In April 2011, upon the initiative of China, the military chiefs of SCO members held their first meeting in Shanghai, which has achieved satisfying fruits. China is full of confidence in further expanding defense and security cooperation within SCO.

As a NATO member state, Bulgaria is concerned with the relations between China's military and NATO. What is China's position on developing its ties with NATO?

China is sticking to the idea for the creation of a new security concept based on mutual trust, mutual benefit, equality and cooperation, joint creation of a long-term stable and peaceful international environment.

Based on this principle in the past few years, China and NATO have restored and developed their contacts and exchanges at various levels and in various forms. We believe that under the current international situation, keeping bilateral contacts and strengthening bilateral exchanges will benefit both regional and global peace and stability. The Chinese side wishes to continue to explore ways to develop military ties with NATO and the EU.

What are the relations between the armed forces of Bulgaria and China? From the position of China's military attach? in Sofia, how do you view the development of the Bulgarian Armed Forces?

China and Bulgaria have profound traditional friendship. Bulgaria is the second country in the world to establish diplomatic relations with the PRC. The army-to-army relations between the two countries is an important component of the overall bilateral ties.

In recent years, with the increase of the high-level military exchanges, the friendship and cooperation between the two sides has been constantly expanded.

The PLA attaches great importance to the friendly cooperative relations with the Bulgarian Armed Forces and wishes to further promote contacts and push forward practical cooperation with shared efforts.

The Bulgarian army at present is carrying out a series of structural changes and reform. The government has already made a new plan for the development of defense and armed forces and I believe that its gradual fulfillment will boost the strengths and capabilities of the Bulgarian army.

As a military attach? here I personally think that the officers and soldiers of the Bulgarian military possess excellent military qualities and professional spirit. Their outstanding performance in the military missions in Afghanistan is a testimony for that.