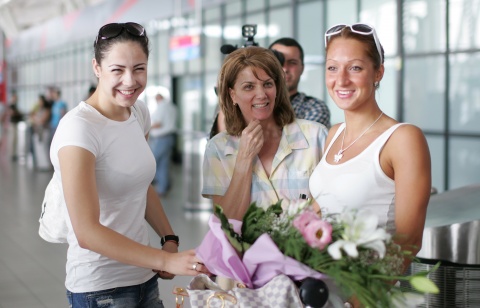 Tanya Bogomilova, Secretary General of the Bulgarian Swimming Federation, has expressed satisfaction with the performance of all Bulgarian competitors at the 2011 FINA World Swimming Championship in Shanghai.

"Bulgarian swimming is entering into the world elite", Bogomilova said Monday as she welcomed home the young hopefuls at Sofia Airport.

Stoychev's achievement torpedoed Bulgaria to place16 in the final ranking of the world swimming championship.

Expressing her satisfaction and pride with Bulgarian swimmers, Bogomilova, an Olympic Champion with a golden medal in the 100 m breaststroke at the 1988 Summer Olympics in Seoul, said that next on the agenda were the European Short Course Swimming Championship and the intense preparationsfor the London Olympics.

"I am 30 seconds away from the Olympic Qualifying Time and I suppose that in the next 2 or 3 competitionc I will be able to meet the standard", 20-year old Avramova told journalists on her return from Shanghai.

"The Championship was a great experience which allowed me to gain a lot of experience. I made into the semifinals twice and my 12 place makes me verry happy", the young backstroker added, explaining that she would not make any break in her training until the 2012 Games in London.

Nina Rangelova admitted she had expected to do better in Shanghai.

"I can say that I am not happy with my performance. Maybe I expected more because I know how hard I trained. This was my strongest year in the pool in terms of training. I very much hope to be able to meet the "A" standard for the Olympics", 20-year-old Rangelova said.