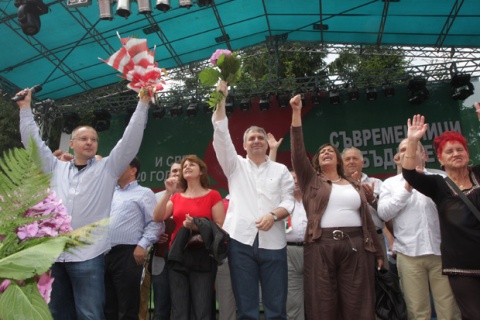 The traditional Bulgarian Socialist Party (BSP) meeting at Mount Buzludzha was held on Saturday, under the motto "After 120 Years - Contemporaries of the Future". Photo by Sofia Photo Agency

Diplomatic cables of the US embassy in Sofia, dated 04/29/2005, has been revealed on WikiLeaks and provided to the project for investigative journalism www.bivol.bg, bringing out new details about the country's Socialist Party and its sponsors.

Classified By: Ambassador James Pardew, reasons 1.4(b) and (d).

1. (C) SUMMARY.  If opinion polls are correct, the Bulgarian

government from power in 1997 amid hyper-inflation and the

collapse of the banking system.  More than eight years later,

many still question whether the BSP is truly reformed or has

sufficient qualified personnel to run the government.   While

the rhetoric of the party leadership is pro-European and

pro-NATO, polls show that much of the party rank and file is

suspicious of both NATO and the United States.  That said,

the BSP is unlikely to make any abrupt changes in Bulgarian

foreign and economic policy if the party comes to power.

They will, however, be more difficult for us to work with

than the current government, looking to Brussels and European

Socialists rather than Washington for guidance on most

issues.  On economic policy, the BSP is hemmed in by an IMF

stand-by agreement, a currency board and impending membership

in the European Union.  Political relations with Russia will

likely become warmer in a BSP government, and Russian

SOCIALISTS AHEAD, BUT HOW FAR?

to 27 percent of the popular vote in the June 25 election,

which under Bulgaria's proportional system will give them at

least a plurality in the next National Assembly.  If the

turnout is low, the Socialists could win an absolute majority

in the 240-seat parliament.  However, at this point in the

campaign, most observers say the Socialists are unlikely to

win an absolute majority.  A somewhat more likely outcome is

form a center-left coalition government with one of the two

(NMSS) or the mainly ethnic-Turkish Movement for Rights and

coalition built around the NMSS -- is less likely, but still

possible if the right does better than current polling

Gotha's centrist NMSS in the 2001 election shattered what had

ex-Communists against anti-Communists.  The latter,

symbolized by the once-powerful Union of Democratic Forces

(UDF), is currently riven by infighting that risks making it

irrelevant in the coming elections.  At the same time, a weak

party organization and the tendency of the Bulgarian

electorate to punish the incumbent will make it extremely

difficult for Simeon to pull off a repeat of his 2001

performance.  Taken together, uncertainty about voter

turnout, disarray within the right, and the unpredictable

nature of support for the ex-king make it difficult to

foresee the outcome of these elections.

4. (C) Critics of the BSP assert that the current moderate

former members of the Communist-era security services.  While

both are certainly present within the BSP, most neutral

observers believe their influence is exaggerated by the

the BSP and now Bulgaria's President, turned the party

decisively toward the West when he was in charge.  Though no

longer formally a member, his influence over the party

continues to be strong.  Purvanov's protege and current party

reformist wing of the party.  The economic policies outlined

in his keynote speech to the annual party congress closely

taxes on dividends, and maintaining the currency board.  Yet

even as he laid out his economic policy,  Stanishev

repeatedly referred to the Congress delegates as "comrades."

5. (C) Stanishev's use of the term "comrade" illustrates the

bifurcated nature of the Bulgarian Socialist Party.  Many of

its core supporters are elderly pensioners who have lost

ground economically since the fall of communism.  Moreover,

unlike similar parties in Poland and other central European

simply changed its name.  While the social democrats appear

to have the upper hand in the BSP, it is still a "big-tent"

party that must please its hard-line faction, if only by

addressing them as "comrades."  An equally serious split

politicians, leading many Bulgarians to question the

verge of EU membership.  "The BSP simply does not have enough

trained personnel to govern alone," is a frequently heard

6. (C) Bulgaria is firmly in NATO and on the path to

membership in the European Union.  The leadership of the BSP

supports a U.S. military presence in Bulgaria in principle,

although negotiations of a U.S. presence will be much tougher

with a BSP-led government.  On the economic side, the

Socialists have said they will stick to the IMF stand-by

agreement and maintain the currency board.  In short,

Bulgaria's general strategic orientation toward the West is

clear and unlikely to change.  Yet within these broad

confines, the Socialists -- if elected -- will likely be far

more difficult for us to work with than the current

interests, but it would be wrong to overestimate their

influence on the current leadership and especially President

Purvanov.  Yet even the most reform-minded members of the

leadership take their cues not from Washington or London, but

himself looks almost reflexively to the Socialist

International and the Party of European Socialists for

speeches.  There are, unfortunately, few true Atlanticists in

7. (C) On Iraq, Stanishev has told his electorate that he

takes power.  However, some of the most powerful insiders in

the party, including those around Purvanov, dismiss

Stanishev's promise as pre-election hyperbole.  They say that

there will be no abrupt pullout after the election.  Instead,

Purvanov's position -- and that of the current government --

that Bulgaria should withdraw its forces at the end of the

year will prevail.  According to these sources, the BSP

widely perceived as irresponsible.  On the contrary, the BSP

needs to demonstrate that it is a responsible and predictable

actor on the international stage.

8. (C) Russia's influence over the BSP is hard to gauge.  Out

of habit, most BSP leaders probably feel more at home with

Russians than with Americans.  But this is as much due to the

limited contact between the BSP and the U.S. prior to the

reformists' ascent than to any lingering ideological affinity

for Russia.  We now have excellent contacts within the BSP at

all levels.  Nevertheless, for historical as well as cultural

reasons, there are far more Russophiles in Bulgaria than

there are in, for example, Poland or the Czech Republic.  On

the political level, relations with Russia would likely

9. (C) The one area where Russia's influence is likely to

grow if the BSP takes power is in the economy.  Most

with the BSP, especially in the energy sector.  The Bulgarian

subsidiary of LukOil -- which pays some 20 percent of all the

taxes collected in Bulgaria -- is reportedly a BSP sponsor.

the nuclear power sector, is closely tied in with Russian

business interests.  Beyond this, there are a whole series of

"Red businesses" whose owners became wealthy by stripping the

assets of state-owned industries during the previous

Socialist government, and who still owe a debt of gratitude

10. (C) A Socialist government will not resolve corruption

issues in Bulgaria and could make matters worse as old habits

die hard.  However, pressure from the European Union will

almost certainly lead to some kind of judicial reform,

regardless of who wins the election.  The Socialist have made

judicial reform and the fight against organized crime a

center-piece of their campaign, but it is difficult to judge

their sincerity.  In any case, we doubt there will be a

dramatic change in either direction under a BSP-led

11. (C) The Socialists appear to have learned from the

economic mistakes of the Videnov government, when street

protests drove the Socialists from power after they ran the

economy into the ground.  Under a BSP-led government, there

would likely be a greater emphasis on social welfare and

state-sector solutions to social problems, but still within

the confines of stable fiscal and monetary policies.

might slow, but fiscal reality should prevail in the long run

companies on the books forever.  Stanishev has emphasized to

us that the BSP can not afford another failed government.

12. (C) If the Socialists come to power, a radical shift in

the direction of the country is unlikely, although promotion

of U.S. policy in Bulgaria will become far more difficult

with a BSP-led government.  The U.S. can influence the

outcome of the current election campaign only at the margins.

Democratic Institute (NDI), which many believe will primarily

assist the center-right.  We are also looking for ways to

with the U.S. have paid off (reftel), and thereby help

improve its results on election day.  Regardless of these

efforts, the NMSS may well be the underdog on election day.

However, if the Socialists end up forming a coalition

government with the NMSS -- a scenario that many Bulgarians

believe is likely --  the participation of the ex-king's

party will have a moderating effect on the any BSP-led

government.  Beyond this, we will continue to engage the

moderates around Stanishev and the President and try, to the

extent we can, to isolate the hard-liners within the BSP.