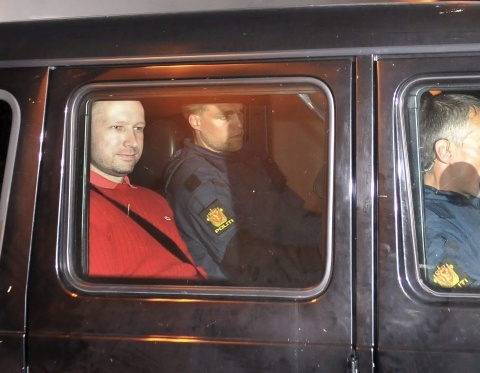 Bomb and terror suspect Anders Behring Breivik is pictured in a police car leaving the courthouse in Oslo, Norway, 25 July 2011, after the first court appearance. Photo by EPA/BGNES

Anders Behring Breivik, the 32-year-old man who killed at least 77 in a bombing attack and a shooting rampage in Norway last Friday, has demanded that the government resign in exchange for his cooperation on providing information, a media report said.

Broadcaster NRK reported on Sunday the information, saying it comes from police sources.

Meanwhile the Aftenposten newspaper said Breivik had been delayed in traffic on July 22, forcing him to detonate his bomb in Oslo's government quarter only after most offices had closed for the weekend.

Anders Behring Breivik has admitted carrying out a massacre on an island, a venue for a Labour Party youth camp, and a bombing in the capital Oslo. But he has refused to accept criminal responsibility for them, saying that his actions were "gruesome, but necessary".

The death toll from Breivik's horrific crimes rose to 77 over the weekend after a body was found in the water off the isle of Utoya a week after his gun rampage there.