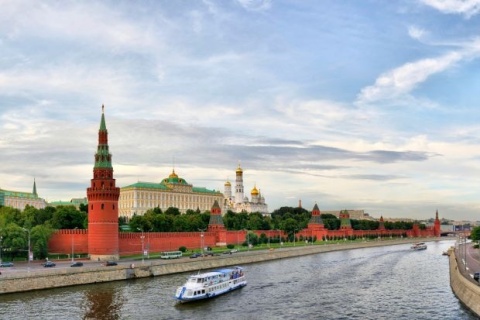 Tour boats, cruising on Moscow River, are a usual sight in the Russian capital. File photo

Seven people have drowned after a tour boat hit an anchored barge on the Moscow River in the Russian capital overnight Sunday, local time.

The number of those missing remains unclear with reports listing them between two and five, however, according to official information of the Russian Emergency Situation Ministry, seven of the 17 people on board have been rescued. The bodies of five passengers, including the one of the captain of the boat "Swallow," have been pulled out"

Rescue and emergency teams are trying to take the boat, which is pinned under the barge, out of the waters.

BBC cites, Yury Besedin, an emergency ministry official, telling local television the accident was "provisionally believed to have taken place because of breaches of shipping rules".

According to the Russian news agency RIA-Novosti, the tour boat was booked for a birthday celebration by a group of young people, who often used it for their parties.

The accident comes three weeks after a tourist boat sank on the Volga River in Tatarstan, killing more than 100. It happened after "Bulgaria" - a double-decker river cruiser built in 1955 - listed during a thunderstorm on the river and sank in minutes, trapping many passengers inside. About 80 people were rescued.

Officials said the boat was designed for 140 passengers and crew but it had been carrying 208 people. It also lacked the correct licenses and one of its engines was not working.