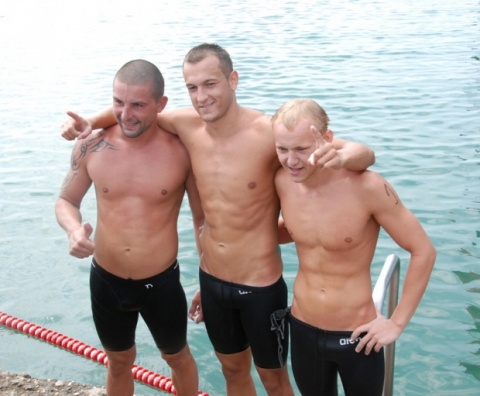 Bulgaria's Black Sea city of Burgas has brought its traditional swimming marathon back on the sports agenda. Photo by darik news

Over 70 Bulgarians took part in Saturday's swimming marathon from the St.Anastasia isle in the Burgas Bay to the bridge in the city's Sea Garden.

The Burgas Municipality revived the unique swimming event after a break of over 15 years.

Nikol Koshedzhiyska was the first lady to cover the 6.3km distance, outswimming a wide majority of male contestants to end up fifth in the final ranking.

Second and third place in the women's category went to Maria Zlatkova and Tanya Kraynova.

The award fund of BGN 6000 was distributed among the first twelve male and female swimmers, who also received bonuses provided by the sponsors of the event.

"This year we had the dress rehearsal. Next year we shall have an international event which will further boost the prestige of Bulgarian swimming and of our town", Burgas Mayor Dimitar Nikolov said.

Bulgaria's Black Sea city of Varna traditionally hosts the Galata-Varna swimming marathon (4.5km), an open water swimming event with an almost 100-year history, which is accompanied by a mini-marathon (300m) for juniors.