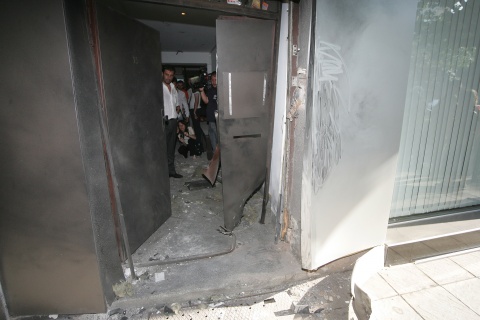 The two brothers who were suspected for having recently placed two small bombs in front of offices of Bulgarian oppositional parties have been released on bail.

Pavel Ermalaev and Veselin Ermalaev were detained as evidence and witness accounts suggested they may have placed the bomb that recently went off in the wee hours of July 19 in front of the oppositional conservative Law, Order and Justice's headquarters in downtown Sofia.

Some twenty minutes after the first blast, another explosion took place in front of an office of the party of former Prime Minister Ivan Kostov, the right-wing Democrats for Strong Bulgaria (DSB)

The Head of the Unit for Combating Organized Crime (GDBOP) has pointed out both bombs contained about 150 grams of trotyl (T.N.T.), which along with the timing, could mean the two explosions were the work of the same perpetrator.

Right before the blasts, both RZS and the rightist Blue Coalition, which includes DSB, had declared they will support the unsuccessful no confidence vote called over what the opposition had stated was a failure in the sphere of home affairs.

The explosions have been widely linked to the one that took place February in front of the anti-government tabloid Galeria weekly.

The newspaper is believed to be the controversial alleged mafia boss and Presidential hopeful Aleksei Petrov's mouthpiece. He is also considered to be both Prime Minister, Boyko Borisov's archenemy and closely linked to RZS.

Right before the blast, Galeria had published transcripts of taped phone conversations between senior government officials and Customs Office chief Vanyo Tanov, which prompted Borisov to seek and win a confidence vote in Parliament on January 20.