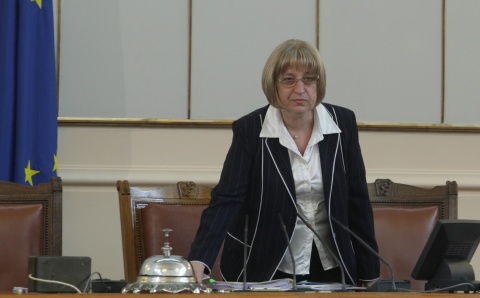 The call for the removal of Bulgarian Parliamentary Chair Tsetska Tsacheva, issued by a host of independent MPs, has been put off for September 07. Photo by BGNES

Bulgarian independent MPs have temporarily suspended their call for the resignation of Parliament Chair Tsetska Tsacheva.

The motives for demanding that Tsacheva be removed from office included "a violation of the constitutional principles of equal treatment of Members of Parliament who are not committed to a parliamentary group or have no political affiliation".

The independent MPs complained that Tsacheva had failed to take the "long-overdue" necassary steps to include them into standing committees.

They also claimed that she regularly allowed derogatory speech from the parliamentary tribune, thereby eroding the "good name and the prestige of the entire institution".

The complaint also accuses the Parliament Chair of systematically overstepping her mandate by obstructing questions to the Prime Minister and the Cabinet.

A working group would be set up to ensure that every MP can participate in parliamentary committees, Kiril Gumnerov said after Thursday's meeting with Tsacheva.

According to the former Ataka MP, the working group would be tasked with recalculating the relative weight of each parliamentary group and cutting quotas to accurate proportions where necessary.

By September 07, the ad-hoc unit would come up with a decision on the basis of its calculations, determining the number of seats each parliamentary group has in a committee.

In his words, the step did not imply an increase in the number of committees but a revision of each party's quota.

The petition calling for the pre-term removal of Parliament Chair Tsetska Tsacheva has been suspended until September 07.

On July 20, a total of 12 of the 18 "independent" members of the Bulgarian Parliament, renegades from a wide array of political parties, issued a declaration backing PM Boyko Borisov and providing his minority government with a parliamentary majority.

The renegade MPs had left the ranks of the rightist Blue Coalition, the marginal conservative party RZS (Law, Order, Justice), the nationalist party Ataka, and even the opposition ethnic Turkish party DPS (Movement for Rights and Freedoms).

In addition to declaring their support for the government of Boyko Borisov and his party GERB, the renegade MPs criticized the opposition – i.e. the Socialists and DPS backed by the Blue Coalition – for initiating a third no confidence vote against the Cabinet.

The newly acquired significance of the renegade MPs as being crucial for the survival of the Borisov Cabinet became tangible after US Ambassador James Warlick had a meeting with them. The USA has traditionally provided Borisov with strong support.