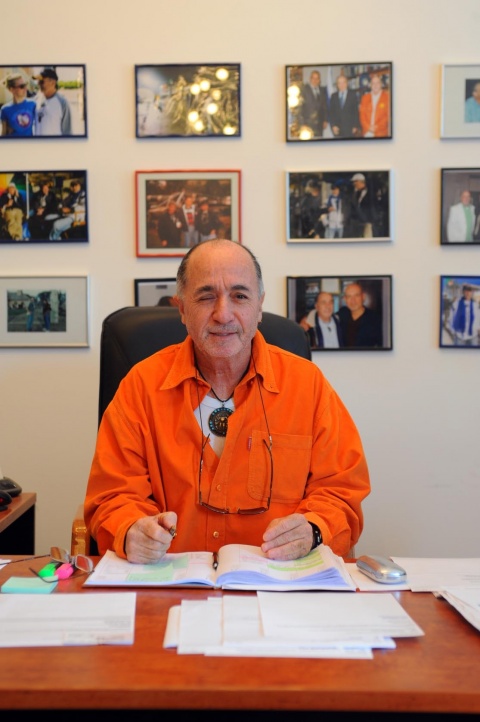 A star-packed movie featuring Bruce Willlis, Sylvester Stallone, Jet Li, Arnold Schwarzenegger, Mickey Rourke, Jason Statham, John Travolta, Chuck Norris and Jean Claude Van Damme among others is to be shot in Bulgaria, Bulgaria-based NU Boyana studios CEO David Varod has confirmed. He talks about the much-anticipated sequel to "The Expendables", as well as other exciting prospects, in an exclusive interview for Novinite.com (Sofia News Agency).

Some very big names have been mentioned recently as very likely to shoot in Bulgaria soon, the likes of Bruce Willis and Silvester Stallone. Is there any development on that?

Yes, we are definitely going to do that project. It is going to be a sequel the "The Expendables". The shooting is going to take place the second week of September. The movie is on, definitely. It will be a very good thing for Bulgaria, since there are some very big stars coming.

Would you disclose some of the names coming for sure?

Sylvester Stallone, Jason Statham, John Travolta, Arnold Schwarzenegger, Chuck Norris, Jean-Claude Van Damme, Dolph Lundgren, Mickey Rourke...who else? Of course, Bruce Willis. The director is Simon West, who is also a name. He is already here and has started working on the film. I believe the sequel will be better than the first movie.

There was another possible project involving Ben Affleck and George Clooney recently linked to NU Boyana.

It was not a project, it was a possibility. Ben Affleck came here and checked out probable locations. The story is taking place in Iran and it looks like it's shooting is going to take place in Istanbul, which I would not call exactly a mistake, but I would like to point out that I have worked as a movie designer for 25 years, I have done projects involving Iran and I know Iran.

Istanbul and Tehran do not match at all. Funny enough, it is much easier to match Tehran to Sofia. But the director sees the story a bit more romantic - Istanbul does have a special look, but it has nothing to do with Iran. From my point of view, it is economically more expensive to shoot there, as well as more problematic considering the subject of the story, but everyone makes their own choices.

So, they have definitely decided to shoot there?

Well, let's see if they do it. It is a long way from being ready. People are coming and going the whole time, checking locations.

You have been saying that Bulgaria's government needs to create more incentives for filmmaking in the country. Would you elaborate on that?

Nowadays, everybody in the world is trying to attract the film industry, there are economic reasons for that. Besides that, money means jobs. And I believe that the most important thing is publicity. It is very important for the country's image abroad.

Currently, you have incentives for the film industry in the US, you have them in Canada, you have them all over Europe. The competition is huge - the Czech Republic, Hungary, Germany, France, Belgium, the UK - not only the bigger countries but also the smaller ones are competing, including Serbia, Macedonia, Malta, Cyprus. If we do not create more incentives, we would look unattractive.

But I have had a very productive meeting with government officials and I believe the market will change very dramatically this year.

You said the competition is huge - what advantages does Bulgaria have, and NU Boyana in particular, which would help in that situation?

You know, not only Bulgaria is pretty, its neighboring countries are pretty, too. The Balkans offer very beautiful filming locations - and the countries are quite similar. But people do not come only because of the scenery, they are looking for high-quality professionalism. And the one thing we have managed to do in the course of the last couple of years is dramatically raising our staff's level of professionalism to very, very high standards, internationally. People know they are going to get the best when they choose Bulgaria.

Of course, we need to be attractive from an economic point of view, too. That is why we need to create more economic incentives. I have said that many years ago and I will repeat it - Bulgaria can be number one in Europe.

Bulgaria's filmmaking has been on the rise recently, with several movies receiving prestigious awards at international festivals. How do you see NU Boyana's role in supporting Bulgaria's movie industry?

NU Boyana is supporting it much more than the government does. The government does support Bulgaria's filmmakers, but the support has been very insufficient economic wise. Students used to pay for the projects they were doing here - with us, they do not pay. We are supporting Bulgarian movies big time. NU Boyana is not making any profit from Bulgarian movies - but I see this support as very important, since I am a part of this industry. After having spent twelve years in Bulgaria, I am not an outsider. I am not just a foreigner working here; Boyana is a Bulgarian company.