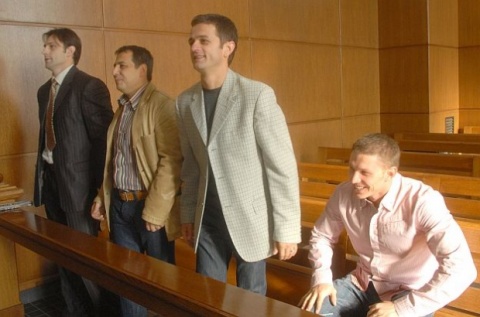 The four defendants in the murder case of Milcho Bonev seen in the courtroom during a previous trial session. Photo by Sofia Photo Agency

The Sofia City Court issued Wednesday a not-guilty verdict for all four defendants in the case of the emblematic murder for hire of underworld figure Milcho Bonev and five of his bodyguards.

The Prosecutor's Office asked for life behind bars for Stilyan Georgiev and Anatoliy Mankov, but dropped the charges against Tihomir Dochev and Georgi Stefanov.

Bonev AKA Bay Mile and the bodyguards were gunned down in the Sofia "Slaviya" restaurant on July 30, 2004.

The killers arrived in two stolen cars with fake license plates and with police lamps mounted on top. They carried Kalashnikov automatic guns and handguns and wore black masks and gloves.

The two bodyguards, standing in front of the restaurant were killed first before the gang opened fire at Bonev and the other bodyguards inside.